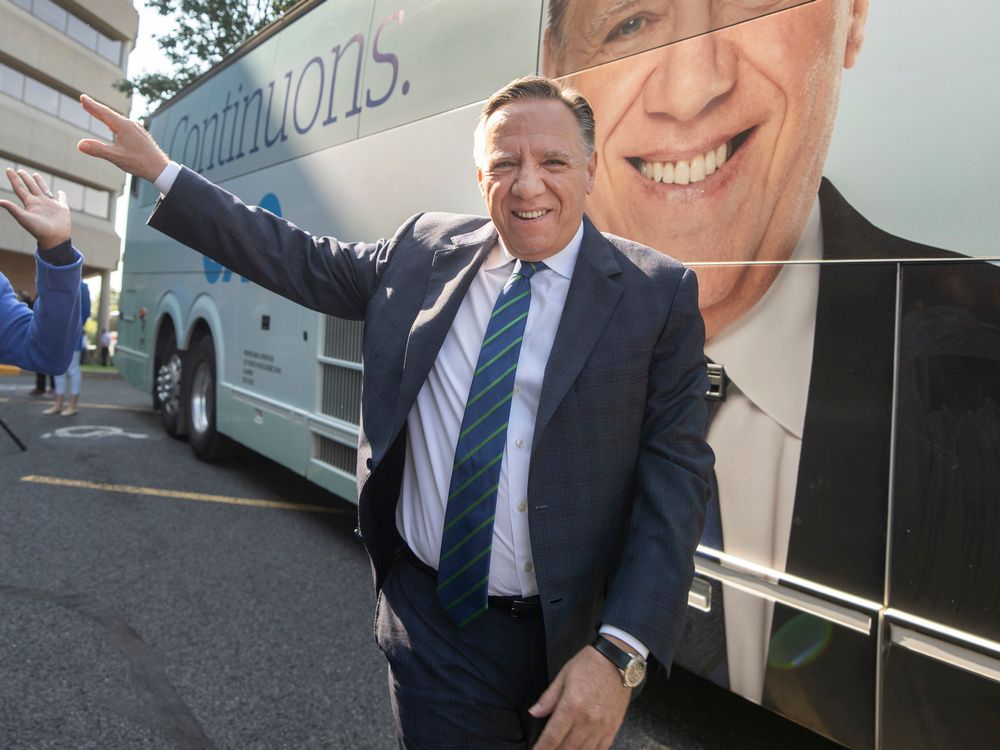 Apart from the Parti Québécois and the Coalition Avenir Québec, all the major provincial parties discuss their policies and platforms in English as well as French on their websites.

The offending words were in an English version of a CAQ document. Titled “Now. Our record,” it outlined the party’s achievements over the past four years.

“The entire website is only in French,” Legault said. “There was a (section) that had been made bilingual. It should have been all in French.”

Suggesting the anglophone community is “very well treated,” he said the CAQ deleted the English to highlight the fact that French is Quebec’s only official language.

As of 3 p.m. Wednesday, “Now. Our record” was still splashed on the front page of the English side of the party’s website. But clicking “read more” brought visitors to a French version of the document.

For now, at least, the CAQ has kept previously posted English-language press releases, the last of which is dated Jan 13, 2022, announcing the end of the second pandemic curfew. A link to an English donation page also remains.

On CJAD Wednesday morning, the Quebec Conservative leader insisted “in no way under my leadership will there be a referendum, period.”

He was reacting to news coverage of his press conference on the previous day.

Asked about sovereignty and referendums on Tuesday, Duhaime, a former Parti Québécois and Bloc Québécois activist, said there would be no referendum “during the next mandate” if he becomes premier. He also said that “in the current context,” he would vote No in a sovereignty referendum.

Could Legault’s CAQ come up the middle and make a breakthrough in hostile territory — the West Island?

The scenario was floated by veteran political observer and poll-watcher Éric Grenier in his The Writ newsletter this week.

He zoomed in on Marquette riding, which includes Dorval and Lachine, which the Liberals won handily in 2018, garnering 43 per cent of the vote ahead of the second-place Coalition Avenir Québec (28 per cent).

The riding has long been a Liberal bastion. Former professional hockey player Enrico Ciccone won for the Liberals in 2018 and is seeking re-election.

“There is the potential that in a seat like Marquette, the Conservatives could split the vote enough to let the CAQ move ahead,” Grenier writes.

Dominique Anglade is accusing François Legault of pitting Quebecers against one another.

Speaking at a press conference in St-Jacques-le-Mineur Wednesday, the Liberal leader was asked to comment on the record of Legault’s CAQ government.

“He’s a premier who has divided Quebecers, whether it’s francophone versus anglophone or immigrant versus non-immigrant,” Anglade said. “He’s always dividing Quebecers.”

As premier, Legault has focused exclusively on helping people who support his party because he thinks only CAQ supporters are “good Quebecers,” she added.

She said Legault again showed how divisive he can be on the weekend when he suggested that “people from Montreal should stop looking down on people from Quebec City and Lévis.”

Read our election live blog every weekday at montrealgazette.com