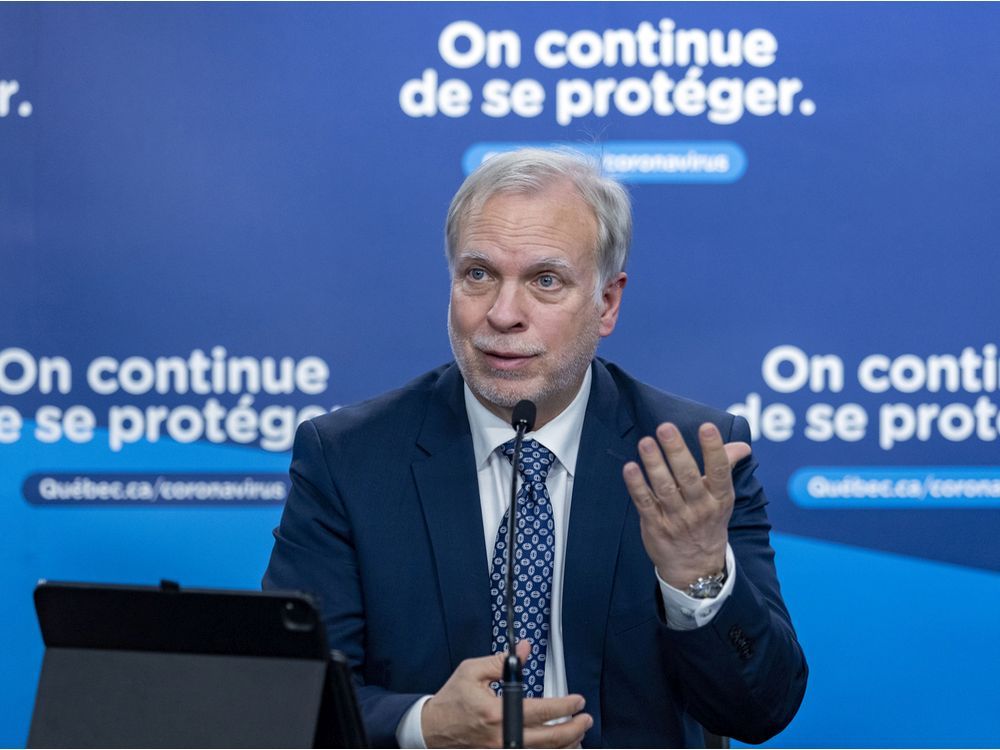 At a press conference in Montreal, he reported that the number of health-care workers off sick with the virus has jumped by 60 per cent in less than a week to 8,600, “a number that worries us.”

“If the trend continues, hospitalizations will continue to go up,” he said.

Two-thirds of new cases in Quebec are the BA.2 Omicron sub-variant, Boileau said, up from 57 per cent last week.

Boileau said the government has not yet decided whether to maintain its plan to eliminate face mask rules in most indoor public spaces by mid-April. It will review that decision as the situation evolves, he said.

However, there is no question of bringing back the kind of sweeping anti-COVID measures enforced during earlier waves of the pandemic, so it’s up to individuals to take precautions, he said.

“We have to learn to live with the virus,” he said.

People at highest risk, like the elderly and immunocompromised, “must be more vigilant,” Boileau said, urging Quebecers to follow health guidelines on hand-washing, social distancing and mask-wearing.

People with symptoms should take a rapid test and, if infected, isolate at home for at least five days, he said. Since they are contagious for up to 10 days, they should continue to avoid contacts for another five days, especially with vulnerable people, he said. The unvaccinated present a higher risk of infecting others, he noted.

Government projections suggest cases are likely to reach half the levels seen in January at the peak of the fifth wave, Boileau said.

Montreal is the region least touched by the surge in infections, he said, noting that the regions most affected are the Gaspé/Magdalen Islands, Saguenay—Lac-St-Jean, Côte-Nord and Lower St. Lawrence regions.

Asked why, Boileau said the reason is probably that the Omicron variant hit hardest in Montreal, the Eastern Townships and Quebec City region, resulting in higher levels of population immunity. Regions that were largely spared in the fifth wave are now experiencing rising infections, he said.

The province is not planning a mass vaccination campaign for fourth doses of vaccine for now, since the effectiveness of the third dose has not yet waned in most cases, he said.

But a campaign to administer fourth doses to residents of long-term care facilities and seniors’ residences and people over 80 will get underway Tuesday.

Last week, the Comité sur l’immunisation du Québec recommended that the province start planning a mass vaccination campaign for the fourth dose in the fall.

Quebec Transportation Minister François Bonnardel and Laval Mayor Stéphane Boyer announced on Twitter Sunday that they had tested positive for COVID. Public Security Minister Geneviève Guilbault tweeted that she was working from home after her four-year-old daughter tested positive for the virus.

All our coronavirus-related news can be found at montrealgazette.com/tag/coronavirus.

For information on vaccines in Quebec, tap here.

Sign up for our email newsletter dedicated to local COVID-19 coverage at montrealgazette.com/coronavirusnews.

Help support our local journalism by subscribing to the Montreal Gazette.