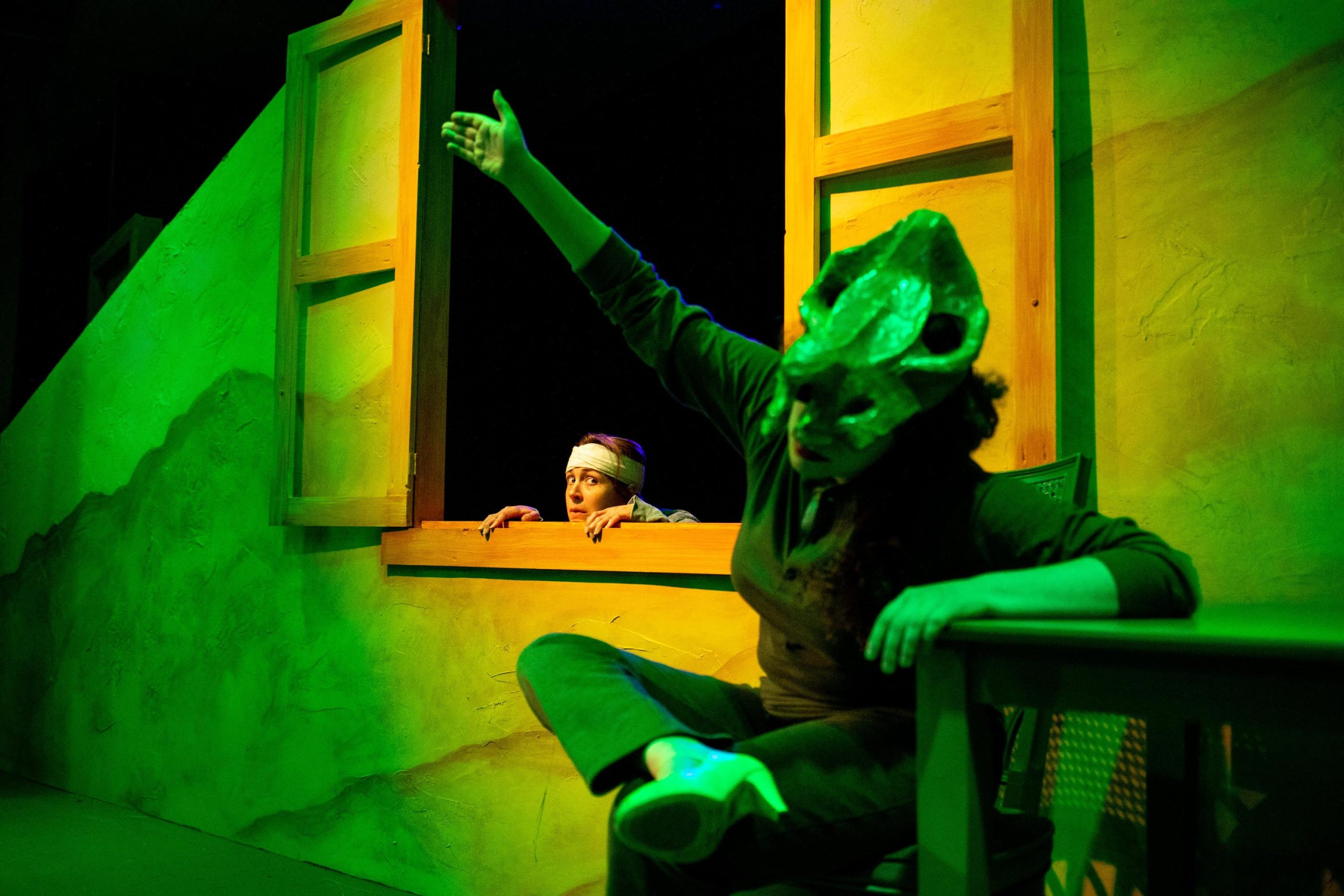 Sunday in an archetypical French town: A hung-over Berenger (Mary Myers) joins his friend Jean (Stephen Murray) at the outdoor café. Jean is immaculate in his suit, bowler hat, and well-groomed mustache. Almost immediately he berates Berenger for his alcoholism, lack of punctuality, and disheveled appearance and starts to lay out a plan for Berenger’s mental and physical revitalization. Their dialogue starts to parallel the conversation at the other table, where a logician (Nick Martin) is explaining something to an older gentleman (Lee Gerstenhaber). His syllogism is so pure, so devoid of facts and meaning that soon the gentleman has been convinced that Socrates was a cat.

Then a rhinoceros runs through the town.

The citizens respond by discussing from whence it came, whether it had one horn or two, whether it is an African or “Asiatic,” as it’s referred to in the play, rhinoceros (there are actually two extant species of rhinoceros indigenous to Africa, and three to Asia), and upon the second sighting, during which a cat is trampled, whether there are one or two rhinoceroses. Luckily there’s a logician on the premises!

So begins Eugène Ionesco‘s absurdist classic Rhinocéros!, currently running at Pointless Theatre Company’s new home at Spooky Action Theater in a new translation by director Frank Labovitz. The play follows Berenger, Ionesco’s recurring dissolute everyman and alter-ego, as he watches his friends, neighbors, and coworkers go from being repelled by the rhinoceroses taking over their town, to electing to become rhinoceroses.

In his native Romania, Ionesco witnessed every one of his friends join the Iron Guard, a fascist paramilitary and political party. In 1942 he returned to France, where he spent part of his childhood. There, he witnessed much of the population collaborate with the Vichy regime. And while, as Americans we understand the manner in which the characters compare the African and Asian rhinoceros in light of our country’s history of racism, when Jean suggests Berenger might be “Asiatic” we recall anti-Semitic slurs used by the European far-right. It’s also worth noting that there is much European folklore about Jews having horns.

Myers is a terrific Berenger, nimble with her tumbles and pratfalls, her furrowed brow, contorted mouth, and general twitchiness register ever increasing levels of anxiety and confusion. There is a memorable moment when she hangs off a divan’s headrest as if it’s a fatal drop while Nicholas Temple’s Dudard—Ionesco’s caricature of Jean-Paul Sartre, who had earned the playwright’s ire as an apologist for Joseph Stalin‘s atrocities—defends rhinocerizaton as a choice. Murray’s performance of Jean straddles the character’s authoritarian tendencies and the tradition of being the half of the comic duo who is a stickler for the rules. Melissa Carter is wonderfully funny both as the grocer’s wife dancing with a broom while longing for her lover, and as Mrs. Boeuf, the wife of Berenger’s first co-worker to become a rhinoceros.

Ionesco doesn’t offer a simple explanation for the citizens’ rhinocerization: Mrs. Boeuf joins out of love for her husband; Jean, the most obviously fascistic, in his pursuit of vitality; Botard (Gerstenhaber) Berenger’s leftist co-worker, out of solidarity with the people; the logician out of his rejection of facts and meaning; Dudard in his pursuit of individual choice; and Daisy (Momo Nakamura) Berenger’s love interest eventually rejects his proposal for a future together in favor of the rhinoceroses’ singing. Indeed, composer Tommy Sherrod‘s free-jazz score captures both the discordant trumpeting that Berenger hears as well as the beautiful melodies that entice Daisy.

In fitting with Pointless Theatre’s signature maximalist aesthetic, puppet designer Jess Rassp creates a range of larger and larger rhinoceroses for this production: From shadow puppets projected upon the set to masked characters menacing Berenger, until, finally, a large two-person puppet stomps onto the stage. Scenic designer James Raymond, creates a cobblestoned town square in which milk jugs have been repurposed as flower pots. Costume designer Kitt Crescenzo outfits the ensemble in a number of period costumes (the most eccentric being the lemon tree patterned skirt and apron decorated with red lambs that Carter wears as the grocer’s wife.)

Labovitz’s often hilarious translation maintains a buoyant rhythm throughout, and would well serve other American theater companies interested in staging this classic. Most importantly it respects Ionesco’s layers of meaning while also leaving the central metaphor of rhinocerization open to our more modern concerns: In 2022, it’s hard not to think of the early days of the COVID pandemic when the spread was exponential, or of the populist rage that led to the Jan. 6 Insurrection (fittingly, in October, Pointless held their season launch party at Comet Ping Pong, the subject of the Pizzagate conspiracy theory), or like the soon-to-be-rhinoceroses, so many users of social media who treat the brevity of clichés and memes as the soul of wit, their behaviors become indistinguishable from Twitter bots deployed to sow discord.

Rhinocéros!, by Eugène Ionesco and translated and directed by Frank Labovitz is presented by Pointless Theatre and runs at Spooky Action Theater until April 24. pointlesstheatre.com. $39.

The post <em>Rhinocéros!</em> Is Absurd and Timely appeared first on Washington City Paper.