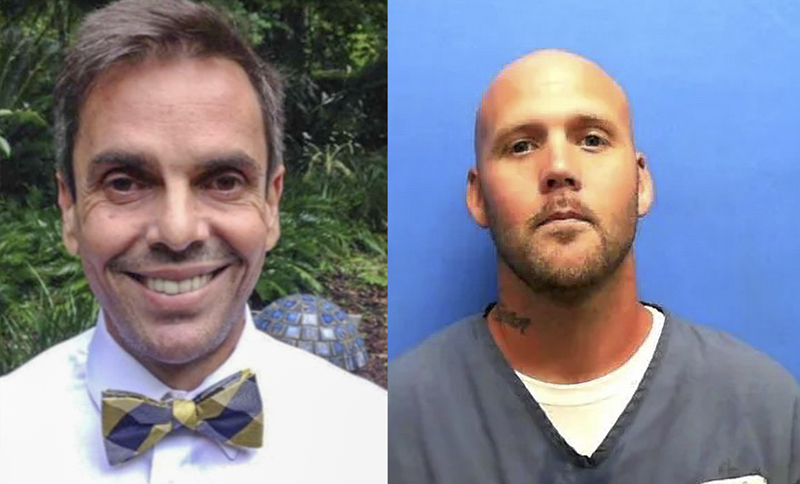 A Florida man who was living with a prominent gay rights activist at the latter’s Tallahassee home has been indicted on first-degree murder charges for allegedly strangling him and tossing his body in a dumpster.

The body of Jorge Diaz-Johnston, 54, a member of one of six couples who challenged Florida’s ban on same-sex marriages, was found in a Jackson County landfill on January 8. Diaz-Johnston, the brother of former Miami Mayor Manny Diaz, the current head of the Florida Democratic Party, had gone missing five days earlier.

Employees of the landfill, which takes trash from the Greater Tallahassee area, told police that just prior to the discovery of Diaz-Johnston’s body that a truck from Tallahassee has dumped a load of trash. The body was wrapped in linens believed to have been taken from his bed, according to the Tallahassee Democrat.

That contradicts earlier reporting that suggested Diaz-Johnston’s body had initially been transported to the Jackson landfill from a dumpsite in Okaloosa County, more than 150 miles away from his home.

Last Thursday, Steven Yinger, a 36-year-old who has a history of burglary and theft convictions, was indicted on first-degree murder and other charges in connection with Diaz-Johnston’s death, including tampering with evidence, theft of Diaz-Johnston’s possessions and fraudulently using his personal information, reports The Washington Post. He is currently being held without bail in the Leon County Detention Facility.

According to the indictment, prosecutors claim that Yinger strangled Diaz-Johnston before moving his body and stealing his BMW and iPhone. The killing was reportedly spurred by an altercation between the two roommates after Yinger allowed a meth addict friend to stay in their home for an extended period of time.

Diaz-Johnston tried to have Yinger removed from the apartment, which prosecutors allege caused Yinger to snap.

Yinger then allegedly tossed Diaz-Johnston’s body into a dumpster, and wheeled the dumpster down the street, where it was picked up by trash collectors on Jan. 7 and transported to the Jackson landfill.

Detectives with the Tallahassee Police Department served a search warrant at Diaz-Johnston’s apartment and reportedly found a trash can nearby with a pool of blood at the bottom of the can.

When police went to Diaz-Johnston’s apartment on Jan. 7, they found his car out from and Yinger inside. Yinger told investigators he hadn’t seen his roommate in several days. Although nothing seemed out of place in the apartment, officers wrote in a police report that Yinger appeared “‘weird as if he was not telling the full truth about something.”

According to the Tallahassee Democrat, police obtained a warrant to search the apartment of a man Yinger described as his drug dealer, to whom he had “rented” Diaz-Johnston’s blue BMW after his disappearance. That man, who was previously sentenced to 12 days in jail for cocaine possession earlier this year, has denied taking part in, and currently faces no charges related to Diaz-Johnston’s murder.

Diaz-Johnston and his husband, Don, sued the Miami-Dade County Clerk’s Office in 2014 for denying them marriage licenses, which led to a circuit judge’s ruling declaring Florida’s ban on same-sex marriage unconstitutional the following year. The U.S. Supreme Court later ruled that all existing state bans prohibiting same-sex nuptials were unconstitutional.

Elizabeth Schwartz, who represented the six couples who challenged the ban, told the Daily Mail that it was sad to see how hard the Diaz-Johnstons had fought to marry, only for their relationship to end in tragedy.

“They fought so hard for their love to be enshrined and to be able to enjoy the institution of marriage, and for the marriage to end in this way — in this gruesome, heartbreaking way — there are no words,” Schwartz said.