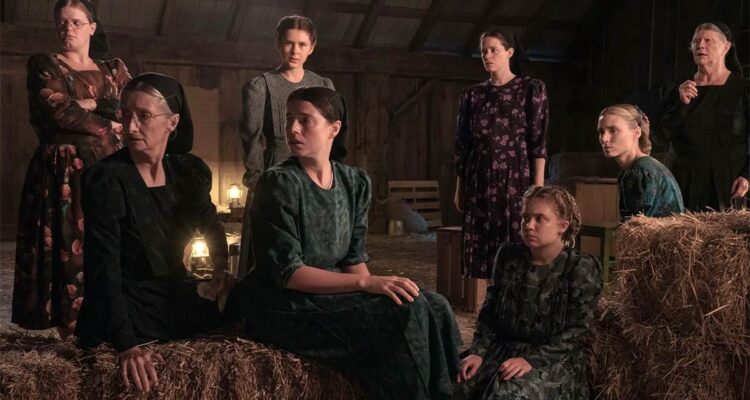 The women in question here belong to a secluded rural religious order on unidentified prairieland and the talking they do throughout Sarah Polley’s immaculately made, intellectually adventurous and politically incisive new film consists of an ongoing debate that will determine the futures of these mostly young women.

Of course, Polley is really addressing all women—and men as well—who are on board with the considerable political and societal changes that have taken place over the past few years and only show signs of accelerating. Engaging an array of excellent actors to portray women in different phases of life, the writer-director draws upon egregious attitudes and behavior of the past and present to envision a significantly altered future, one that can already be glimpsed if you squint your eyes and stand in the right direction–or, as a young Black New York filmmaker hoped for and envisioned more than three decades ago, if you just do the right thing.

Based on Miriam Toews’ 2018 novel, Women Talking is Polley’s fourth feature–following Away From Her, Take This Waltz and Stories We Tell– which is having its World Premiere this weekend at the Telluride Film Festival and is due from Orion and MGM in theaters on December 2. The new film is initially set in a barn where eight trauma survivors discuss and deliberate on their dreadful experiences growing up (as Mennonites in all but name) and being repeatedly raped and in other ways brutalized. But this is not a documentary, nor even a courtroom drama, and in no way feels like one.

Taking matters into their own hands, the women decide to create their own inquiry, a debate based on trials they’ve devised for themselves, and that the decision will guide how the community, such as it is, should move ahead: They can do nothing, stay and fight, or leave.

This leads to considerable debate–about forgiveness, resilience, punishment, the need for change, the possibilities of radical reform. Doing nothing proves not an option at all, but the discussions nonetheless persist for two days in regard to the other two.

Polley refrains from pinpointing specifically who these women are, where they’re from and even when the action takes place. The rural setting helps embed things in earlier times, but the film is adamantly contemporary—and universal–in its concerns.

From the beginning, Polley works on developing a tone that is beguiling in its elusiveness; it’s frisky and yet dead serious, dreamy but committed to life’s essentials, aesthetically playful even when dealing with harsh realities. It skips and dances and is hard to nail down even as it prepares to deliver its heavyweight blows—it really does float like a butterfly and sting like a bee.

As the women in this group were never allowed to learn to read or write, a meek college-educated teacher, August (Ben Whishaw), who’s keen on Ona (Rooney Mara), one of the young women, records their deliberations. That the only male character in the piece is such a wimpy and obedient lapdog raises an eyebrow for a moment or two, but this basically remains a side issue to the main challenges at hand, as unruly and chaotic as the struggle for their resolution may be.

The film’s style and tone are odd, varying and stimulating, even if not everything that’s happening at any given moment is entirely clear. The rich cast—there are no leads per se—includes Judith Ivey, Claire Foy, Jessie Buckley, Frances McDormand (also a producer), August Winter, Kate Hallett and Liv McNeil. For the record, Brad Pitt is onboard as an executive producer. Producers for Plan B are Dede Gardner and Jeremy Kleiner.