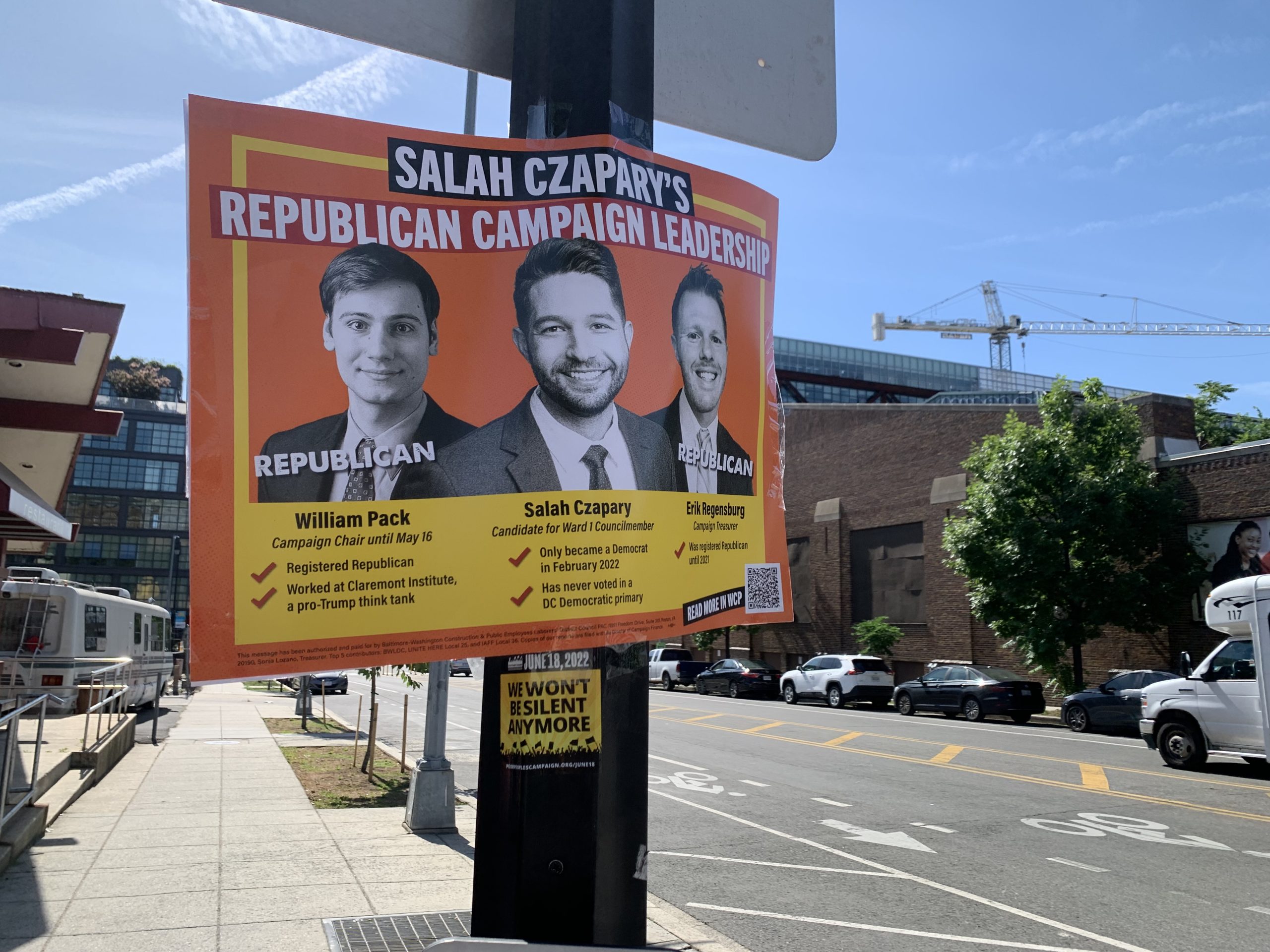 No political season is complete without some last-minute drama about campaign signs being torn down, defaced, or stolen, and it seems D.C.’s 2022 primary is no exception. This time, the controversy has settled in Ward 1, where things are starting to get a bit weird.

It all started last weekend, when a political action committee backed by several local unions supporting Ward 1 Councilmember Brianne Nadeau started putting up some spicy signs targeting one of her opponents, former police officer Salah Czapary. The group was already sending out mailers highlighting a pair of Republicans that served prominent roles in his campaign, and it doubled down with roughly 500 signs doing the same, complete with a QR code linking to Loose Lips’ last article on the issue.

Volunteers posted those signs over the course of Sunday night, and by Monday morning, a “quite significant” number had disappeared, according to Vicky Leonard, political director for D.C.’s local LiUNA affiliate. She began posting people to watch the remaining signs, which is how one volunteer managed to grab a video of a masked man ripping one down in Adams Morgan Monday. (It quickly gained lots of traction on Twitter.)

Leonard says she filed a police report about the thefts Tuesday and provided a photo of her submission to LL. She’s since spoken to a detective about the incident, and put MPD in contact with someone else who had surveillance camera footage of a sign thief. The department didn’t immediately respond to a request for comment.

It might seem like small potatoes in the grand scheme of things (the penalty for destroying campaign signs is a civil infraction, with a $100 fine per sign) but Leonard believes it speaks to a broader attempt at “information suppression” by Czapary’s supporters. She says the unions chose to invest in this messaging because they felt it’s “really critical information for voters to have” and she’s disturbed to see what looks to be a “systematic” effort to remove the signs.

“Campaigns need to file police reports when this stuff happens and make the public aware that folks aren’t really playing by the rules,” Leonard says. She added that the unions are considering ordering more signs to replace the ones that were destroyed, but may not be able to find a printer with “capacity” to manage the job so close to the June 21 primary.

Many of Nadeau’s backers have become convinced that people close to Czapary’s campaign have become involved in taking the signs down, with the most dedicated internet sleuths even accusing one person in particular based on their careful analysis of the sign theft videos. Czapary says he hasn’t “been that engaged in the back and forth about signs on Twitter” and stressed that “vandalism or tampering of any campaign signs is unacceptable,” noting that he’s seen some of his own signs in trash cans. He did not, however, address claims about his campaign’s involvement in the sign stealing, and LL doesn’t have much interest in casting aspersions himself without a bit more evidence.

But it does seem clear, at least, that these attacks have struck a nerve among some segment of Czapary’s supporters. Leonard says the last time her group saw such widespread removal of signs was when it put up materials attacking Dionne Bussey-Reeder in the 2018 at-large race, probably the most bruising campaign in recent D.C. history. It seems the Ward 1 contest is starting to approach that level of intensity.

“I’ve walked the streets of Ward 1, spoken with its residents, and heard their concerns. They know me, they know my heart, and they know I will fight for their concerns on the Council,” Czapary wrote in a statement. “My opponent is more than welcome to spend her time and resources on personal attacks. I’ll continue spending my time speaking with residents about how to build a safer, stronger, and more equitable Ward 1.”

Nadeau is trying to keep her distance from all the mess here too. “It’s kind of amazing to me how much people are talking online about campaign signs,” she tells LL via text.

“Out in the community I’m having great conversations about the work I’m doing to prevent violence and build more affordable housing,” Nadeau wrote. “I think most voters just want to know I’m focused on that work.”

Of course, Nadeau has also been busy setting up a website highlighting Czapary’s “Republican ties,” complete with plenty of red GOP elephants to drive the point home, and sending out attack mailers of her own, so she’s not entirely above the fray. Notice that she hasn’t taken the same steps to critique her other opponent in the race, Advisory Neighborhood Commissioner Sabel Harris.

The councilmember’s supporters have plainly taken her cue and started going after Czapary online for all manner of issues. Some noticed, for instance, that his campaign website’s domain name appears to have been registered in June 2020, when he was still working for MPD. One of Nadeau’s supporters filed a complaint with the Board of Ethics and Government Accountability on the issue last week, according to records reviewed by LL, alleging that this move could have violated the department’s prohibitions on political activity (and even run afoul of campaign finance laws requiring prospective candidates to report expenses like spending on a domain registration).

Czapary’s supporters have suggested that this new focus on even his smallest campaign moves is evidence that Nadeau sees him as a legitimate threat. He has been raising more money, after all, and scored the Washington Post’s endorsement. LL suspects there’s some truth to that assertion, though all this attention could stem from the fact that Czapary avoided scrutiny until the Post elevated his candidacy, prompting Nadeau’s allies to give him a closer look. They likely didn’t have much motivationto boost his name recognition until the Post did so on its own.

It seems fair to assume Nadeau has some solid, built-in advantages: She has eight years of incumbency, the united support of the city’s progressive wing, and a sizable cash advantage (though new finance reports, set to be released Friday, could show a change in the state of things). Harris may not be generating quite as much online vitriol as Czapary, but she’s raised a decent amount of money and could fragment whatever anti-Nadeau vote is out there.

But it also seems reasonable to guess that things wouldn’t be getting quite this wild if there wasn’t some evidence floating around (perhaps via private polling) suggesting that this previously sleepy race could be a lot closer than it once appeared.