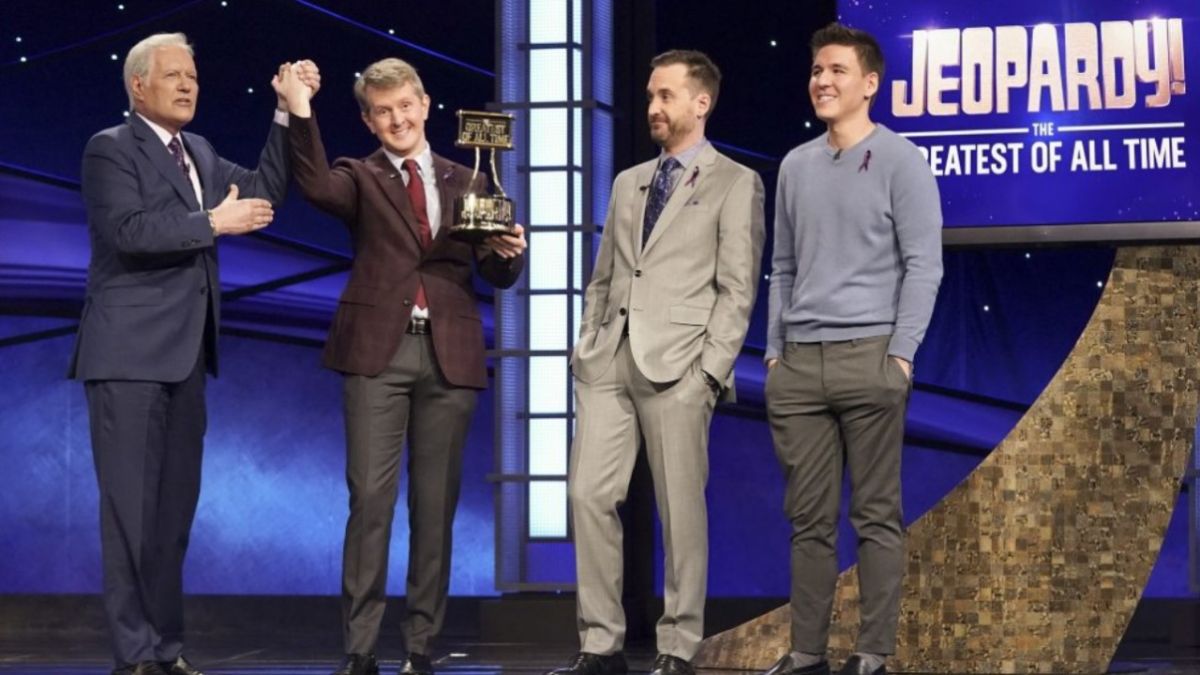 If you added up all the winnings in all the daily games and the various tournaments from the biggest winners of Jeopardy! of all-time, it totals an astounding $18,297,507. Even more astounding is that two-thirds of that total, $12,271,352, has been won by only three players, including the legend Ken Jennings and risk-taking phenom James Holzhauer. However, the player who has won the most in total winnings might not be the person you are expecting.

For years, there was a rule on Jeopardy! that everyone who became a 5-Day Champion would “retire” from the game, take his or her winnings, and step down as a champ. They would automatically be invited to the annual Tournament of Champions, but beyond that, their run would be over. That rule changed before the start of Season 20 in 2003. As a result, the winnings by single players have increased dramatically, with nine of the current top ten winning their cash after the rule change.

When looking at the top ten winners of all-time on Jeopardy!, including everything they won as a contestant on the standard game as well as in various tournaments over the years — like the Tournament of Champions and other one-off tournaments the show has conducted — there are some interesting numbers to unfold. The official Jeopardy! totals do not include consolation prizes, so those have been noted separately when applicable. Here are the winningest Jeopardy! contestants of all time.

Jason Zuffanieri, a math teacher from Albuquerque, New Mexico, made his first appearance on Jeopardy! on July 19, 2019. He went on to win $532,496 in his 19 wins, tying 2005 champion David Madden for what was, at the time, fifth place in consecutive games won. In 2021 the former rocket scientist returned for the Tournament of Champions, which was hosted by another Jeopardy! alum — Buzzy Cohen — following the death of Alex Trebek, where he advanced to the semifinals as a wild card, falling in that round. When factoring in that $10,000 consolation prize, plus the $2,000 consolation from his original loss, Zuffranieri took home a total of $544,496.

Mattea Roach is the youngest and most recent champion on this list (her run spanned April and May 2022), as the tutor from Toronto compiled $560,983 in her 23-game win streak, plus the $2,000 consolation prize from her loss. As well as becoming the winningest Canadian in the game show’s history — an honor that would make Alex Trebek proud — Roach also became one of three contestants to shoot their age, so to speak, and match their age in Jeopardy! victories. As of this writing, Roach has not yet competed in the Tournament of Champions.

A college student whose 13-day cash winnings totaled $411,612, Matt Jackson finished in second place in his season’s Tournament of Champions, earning $100,000, and winning another $100K in the 2019 All-Star Games as part of Ken Jennings’ team. Jackson finished his 13-show run in 2015 as the fourth-highest earner in Jeopardy! history. The graduate of Yale had tried twice to compete in the College Tournament, but was unsuccessful both times. Instead, he was finally successful in getting on the regular show and he certainly took advantage of it. With the $2,000 consolation prize from his original loss, Jackson took home a total of $613,612.

Her husband Jeff Hoppes also competed on Jeopardy! and was defeated by Ken Jennings on the 70th game of the champ’s historic win streak. In a funny coincidence, Hoppes went to high school with Jeopardy! great Brad Rutter. Kelly was the first female champion to win more than five games. Her six-win streak was the longest for a woman until Season 29. She also held the regular-play winnings record for a female champion until Season 30.

David Madden, an art historian from Ridgewood, New Jersey, earned cash winnings totaling $430,400 in 2005. Following his 19-day run on the show, he also split the $1 million prize for being part of the All-Star team that included Larissa Kelly and Ken Jennings, for an additional $333,333. Not included in the official total are the $10K consolation prize from his Tournament of Champions, and the $2,000 consolation from the loss in his 20th game. In total, Madden took home $775,733.

Second behind only Ken Jennings with 40 consecutive games won, Amy Schneider made history during her win streak in 2022. Early in her run, she became the first openly transgender champion to qualify for the Tournament of Champions, and she just kept winning! Her $1,382,800 makes her one of just four contestants to cross the $1 million in regular-season play, and she cracked the Top 5 overall earnings before she even appeared on her season’s Tournament of Champions. With the $2,000 consolation prize from her 41st game, Schneider has taken home $1,384,800.

Matt Amodio’s winning streak ended just a couple of months shy of Amy Schneider’s first appearance, and while his 38-game win streak was two shy of hers, he came out with a higher amount of cash winnings, earning $1,518,601. Both Amodio and Schneider were supposed to appear on the game show before Alex Trebek’s death, but when COVID shut down production, each was given more time to study, which probably helped Amodio, as his time on the show came when Jeopardy! was auditioning guest hosts to find Trebek’s replacement. During his run, Amodio competed under six different hosts. That’s likely a record that will never be broken.

He also caused a bit of controversy with his answering strategy, responding with “What is…” or “What’s…” regardless of if the question asked for a person, place, etc. His remarkable total of over $1.5 million is — again, like Amy Schneider — before his Tournament of Champions appearance. With the $1,000 consolation prize from his loss, he has taken home $1,519,601 to date.

A sports gambler from Las Vegas, Nevada, whose 32-day cash winnings total $2,462,216, Holzhauer took the Jeopardy! world by storm in the winter and spring of 2019, bringing in record ratings with his swashbuckling style and the odd, but daring, amounts of his bets on Daily Doubles and Final Jeopardy.

Holzhauer was not the first to use the style of bouncing around the board until the Daily Double was revealed, but he was especially good at keeping control of the board until he found it, when he would inevitably make his bet a “True Daily Double” and double his money when he virtually always answered correctly. The same thing happened in Final Jeopardy, when he would usually be so far out in front of his two competitors that he would be in a position to bet huge amounts and again, virtually always answer correctly.

Ken Jennings was the first true Jeopardy! celebrity contestant, expanding his popularity beyond just the show’s hardcore fans and into pop culture when he went on his almost unfathomable 75-day run in the summer of 2005. He was the first person to really take advantage of the rule change that allowed champions to keep competing until they were beaten, rather than being limited to five games.

Ken Jennings has parlayed his Jeopardy! celebrity into a career, writing trivia books, appearing on other game shows, and co-hosting a podcast called Omnibus with John Roderick. Following Alex Trebek’s death in November 2020, Jennings was the first guest host to take over in a long line of celebrity auditions to find the icon’s replacement. As of Season 38 in 2022, a permanent host still had not been named, with Jennings sharing duties with The Big Bang Theory actress and neuroscientist Mayim Bialik.

So, at number one is someone you might not have expected: Brad Rutter, a record store employee from Lancaster, Pennsylvania, whose 5-day cash earnings total $55,102. Yes, you read that right. Rutter was a 5-day Champion who had to retire during his first run back in 2000. It’s been since then that Rutter has set records and proven he is easily one of the best players of all time.

Honorable mention goes out to Arthur Chu, a columnist from Broadview Heights, Ohio, whose controversial game play, annoying, aggressive buzzer pressing, and his penchant for getting snippy with host Alex Trebek made him a polarizing contestant among Jeopardy! fans in 2014. He won $298,200 over 12 games in 2014 and won another $100K for finishing second in that season’s Tournament of Champions.

Another honorable mention goes out to Chuck Forrest, a contestant who in the ‘80s who was once one of the best to play the game. Because of the 5-Day Champion rule, as well as the lower cash prizes when he played, Forrest doesn’t appear on the list, but his accomplishments are legendary, including being credited with a common strategy now known as the “Forrest Bounce,” when contestants bounce from clue to clue (a strategy that drove longtime host Alex Trebek nuts), rather than going one by one down a category as contestants were originally intended to do. Arthur Chu and James Holzhauer were both very successful using the “Forrest Bounce.”

Finally, a third honorable mention goes to IBM’s supercomputer known as “Watson,” whose artificial intelligence software was originally specifically designed to compete on Jeopardy! and faced off against Ken Jennings and Brad Rutter in a 3-day game in February of 2011. Watson won the game for a total of $77,000.

Winning a lot of money on Jeopardy! is hard work. These champions don’t just show up with their bad sweaters and inane personal stories and win without any preparation. Almost all these big-time winners studied the game intently before appearing on the show. They watched thousands of hours of old games, read strategy guides, and even sought out the advice of past champions. They are also clearly pretty damn smart people.Ken Jennings’ record of 75-straight days as champion may never fall, but who knows?