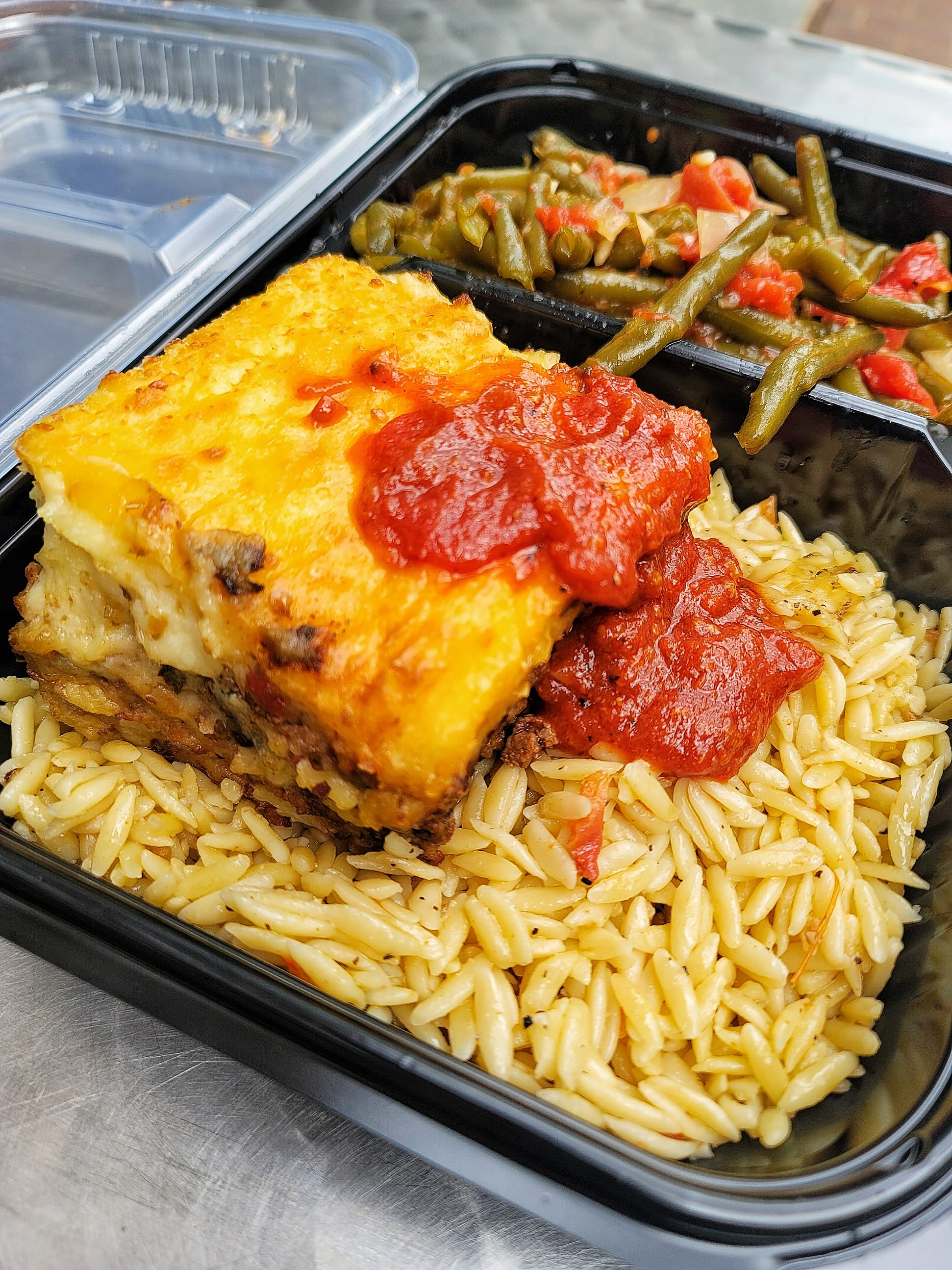 Greek Deli & Catering is a family-owned takeout spot in Northwest D.C. that serves authentic and homemade Greek dishes. Chef Kostas Fostieris lived in Andros, in the Aegean Islands, before moving to the states in the 1970s. He eventually opened his own restaurant, which has been operating for more than 30 years.

The walls in the restaurant are decked with a few portraits of former U.S. presidents and first ladies, along with dozens of framed articles from the restaurant’s many features in local news outlets over the years. Soda machines are on one side of the counter, along with a refrigerated display case showing their cold menu items. On the other side is a large bookcase full of shelf-stable ingredients sourced from Greece, such as honey, couscous, beans, olive oil, and candy. A white printed menu is posted high above the ordering area, which allows you to peek into a tiny open kitchen. A couple of tables are set up on the patio if you choose to eat your food right away.

Greek Deli is a staple for those working in the area. With limited hours due to the pandemic, they get much of their business from nearby office workers. But the previously congested area around Dupont Circle has seen a lot less daytime foot traffic over the past two years, with many employees still working remotely. Despite the slower business, I saw many returning customers on my visit.

Fostieris is very big on his connection with his regulars. His conversations are personable and knowledgeable, but he still keeps the line moving. Even on my first visit, I felt like a regular before even placing an order. As customers came in, the chef asked if they were getting their usual, or if they wanted to switch it up. One regular had worked in the area since 2007 before eventually moving out of state. Greek Deli was always part of her visits back home, stating “Kostas is the best owner EVER!” Another customer occasionally works in the area, having his team stay at a nearby hotel. After one visit, they returned every day of the week.

Greek Deli sources a majority of their ingredients directly from Greece. The menu is divided into hot specialties, sandwiches, soups, salads, sides, and some combo meals. These combos, which include your choice between two soups, are ordered frequently. The hearty vegetarian lentil soup is their most popular. There’s also avgolemono, a creamy and lemony chicken and orzo soup. Even on a warm day, they sold out of both soups, which proves their popularity.

Diners can choose from several proteins for the hot specialty platters. Roasted chicken and turkey are the white meat options. Gigantic beef meatballs slowly cook for three hours in a zesty tomato sauce, and are, simply put, delicious. Spanakopita, a spinach and feta pie layered between phyllo dough before baking until crispy, is a vegetarian crowd-pleaser. Roast legs of lamb are cooked slowly in white wine, lemon juice, garlic, and spices for four hours until fork-tender, then sliced before serving. As someone who doesn’t usually enjoy lamb, this one was tasty, so lamb fans should love it!

Other specialties include moussaka and pastitsio. Each have layers of a creamy bechamel sauce and juicy ground beef, but it’s the fillings that set the two apart. The pastitsio has a layer of pasta. The moussaka has a middle layer of sliced eggplant, with potatoes on the bottom. Both are baked and served like lasagna, with a spoonful of fresh tomato sauce on top. I had the moussaka and fell in LOVE! Each bite melted in my mouf (yes, mouf). I also felt healthier since I went the pasta-less route (is what I’m telling myself).

Each hot specialty is paired with a few scoops of warm orzo, a side salad, and a hefty serving of tender green beans. Now, the green beans are something that I could eat daily. They are braised with chunks of tomatoes, onions, garlic, and olive oil, which creates a light sauce that’s perfect for the orzo. The platters are a decent size. I got two meals out of one serving. The hot proteins can also be added to a Greek salad with a side of creamy balsamic vinaigrette.

Then, of course, there’s the obligatory gyro! Finely ground beef is seasoned with spices, packed tightly into loaf pans, and baked until cooked through. Cooks slightly cool the beef, then thinly slice before serving. The meat is placed onto warm pita bread with tomatoes, red onions, and shredded lettuce. It’s rolled up and wrapped in foil for handheld eating, then slapped with a smear of house-made tzatziki. “I really love this gyro! The meat was juicy, and the pita was fluffy. And there was the perfect amount of toppings on it,” one customer told me.

Greek Deli also offers a handful of desserts to complete your meal. The rizogalo is a creamy rice pudding. A lighter route is the homemade yogurt drizzled with honey and sprinkled with crushed walnuts. However, I went the heavier route by getting a massive slice of their fresh baklava, a sweeter dessert of phyllo dough layered with lightly spiced chopped walnuts, butter, and lots of honey. It is then baked, making a flaky, sticky dessert of love. Baklava is one of the most popular desserts in Greece, which also stands true in this deli.

For those feeding a crowd, the takeout spot also offers catering. Each menu item can be ordered in bulk. A set menu is also available with options similar to the hot specialties, accompanied with salads, side dishes, and desserts. Early birds can also enjoy a hot breakfast of omelets and toasted pita until 11 a.m.

Authenticity and hospitality are the name of the game at Greek Deli. I’m hopeful that they’ll get a lot more business as downtown buildings slowly return to full operation, so those wanting to try them outside of lunch hours can give them a well-deserved visit.

Greek Deli is located at 1120 19th St. NW. Hours of operation are 7 a.m. to 4 p.m. Monday through Friday. Pickup orders are placed in person. Catering orders must be placed by phone at least a day in advance. Delivery is available through DoorDash. Prices range from $8 to $20.