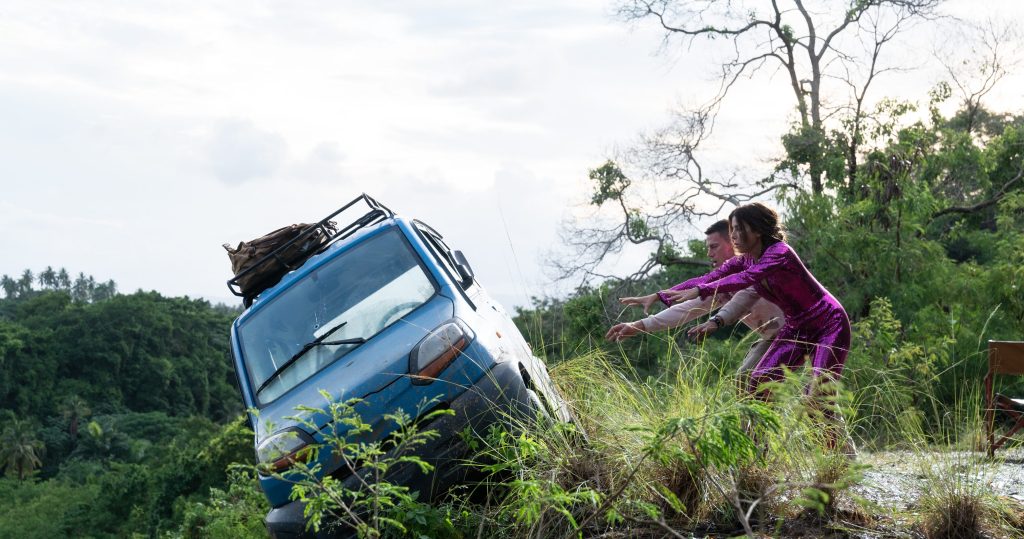 Sunday AM writethru: Refresh for updated chart and analysis In what is a record opening during the pandemic for a female-driven feature, Paramount’s Sandra Bullock-Channing Tatum romantic comedy adventure The Lost City is opening to $31M after a $11.55M Friday and $11.8M Saturday. While the older female demographic has been known to be cautious about moviegoing during the pandemic, they indeed showed up at 60% overall, with those over 35 repping close to half the crowd. Previously, over Valentine’s Day weekend, two-glossy female targeted movies tried to deliver, but did not in their openings: Death on the Nile ($12.8M) and Marry Me ($7.9M).

Lost City‘s debut ranks second for Paramount during the pandemic behind A Quiet Place Part II ($47.5M). It’s the studio’s third movie to open at No 1 this year after Scream and Jackass Forever. In the switch-off from Jim Gianopulos to Brian Robbins as Paramount Studios Boss, the latter was immediately painted by the media as a guy who was primed to embrace theatrical day-and-date, as Paramount Global board chair Shari Redstone looked to mushroom the studio’s fledgling streaming service Paramount+. Not true: This guy isn’t going to burn down a great theatrical slate to keep warm. His talent and experience is in building franchises, and that’s both on the streaming and the theatrical side.

As the box office bounces back, industry executives are reminded about the riches inherent in the ancillary model, especially in the streaming age. Even though Marvel departed Paramount for Disney a while ago, the former studio is still franchise-rich in its Nickelodeon, Hasbro, etc. IP, and that’s currency which will go a long way for a long time. Even the younger-skewing stuff, when made at the right price, is a box office cash cow.

Lost City‘s weekend number is in the range from other Bullock pre-pandemic openers such as the comedy The Heat ($39M) and The Proposal ($34M). It’s a number many in distribution circles were expecting, and continues to prove that theatrical isn’t broken, especially for comedies and female-driven fare, which have largely been jettisoned to streamers. Comedies still work on the big screen, and Lost City played like a rock concert during its world premiere at SXSW at the Paramount Theatre on March 12.

Box office analytics corp EntTelligence has clocked 935K admissions for Lost City in its first day with the average ticket price for the pic being $11.90. The major circuits didn’t upcharge on Lost City like they did for Batman. The audience was spread out here for Lost City, with 36% of the audience attending before 6PM on opening day, 40% coming out between 6pm and 8pm, and 24% after 8pm.

The Lost City is playing best in the West and the Southeast, where nine of the top ten runs are. Utah had theaters in the top ten. Premium large format screens, we hear, are driving 21% of ticket sales. Diversity demos were 51% Caucasian, 22% Latino and Hispanic, 12% Black, and 15% Asian/other. Cinemascore here is a B+, with 80% on PostTrak and a 61% recommend, which is very good for this type of movie right now. Rotten Tomatoes’ audience meter is a bit higher at 86%.

Ahead of opening, social media monitor RelishMix spotted positive conversation for Lost City, with those online “making unending comparisons to Romancing the Stone and The Jewel Of The Nile — with enthusiasm for the playful onscreen chemistry of Sandra Bullock and Channing Tatum and boiling screams of joy for Brad Pitt.” Total reach across Facebook, Twitter, YouTube, Instagram, and TikTok combined is 125.3M social media followers, “exceeding genre norms for action-adventure-comedy,” says RelishMix, with Tatum posts spiking with a super Instagram post at 3.1M views, plus a solid stack of YouTube materials driving 56.6M views.

Tatum is the social media champ here for the pic, engaging 45.6M fans, and driving cast activation on the film at 96%, while also repping 36% of the pic’s entire SMU reach. Other cast members Bullock, Daniel Radcliffe, and Brad Pitt are hot topics in social chatter, but are socially off-the-grid.

While we have some depth in the box office chart, with The Batman seeing a fourth weekend of $18.7M (waiting on update from Warners),  RRR now seeing the second-best opening for an Indian movie at $9.5M stateside, and Spider-Man: No Way Home clicking past $800M, we’re still used to seeing more depth at the weekend box office. All ticket sales look to be coming in at $81.5M, which is 45% off of weekend 12 in 2019. That’s when Universal’s Us drove all movies to a $148.8M weekend. Looking under the hood of that weekend, Jordan Peele’s Us rang up a $71.1M opening, while Disney’s third weekend of Captain Marvel did $34.2M.

The ticket prices for the three-hour action movie RRR, which includes an intermission, are being charged at specialty event prices at $21.75 per seat, according to EntTelligence. The pic is booked at 1,200 theaters and notched a $4.5M Thursday preview, the highest ever recorded for an Indian title in U.S./Canada. Unfortunately, Saturday ticket sales fell apart according to industry estimates with $2.5M, making S.S. Ramajouli’s RRR the second best opening for an Indian movie stateside after his own stateside record with 2017’s Baahubali 2: The Conclusion, which opened to $10.4M and finaled at $20.8M, per Comscore. RRR played best in the East and the South, with the top 10 theater delivering over $50K, and 46 bookings seeing over $25K. Specialty cinema is very much alive, and it’s with Indian epics.

With the major studios not sopping up all the theaters just yet, Bleecker Street took its Naomi Watts thriller Infinite Storm much wider than intended with 1,525 theaters in 187 markets. The survival mountain climber blizzard movie didn’t wow critics at 59% rotten, and froze out PostTrak audiences at 55%. Any money came from the coasts, with NYC Lincoln Square doing $2K to date. Friday looks to be $262K, and the weekend a not-very-powerful $751,2K, for a $492 theater average for a No. 10 slot.

Also in another big plus sign for arthouses during the pandemic is the Daniels’ martial arts fantasy Everything Everywhere All at Once which racked up a $203,9K Friday at ten theaters for a $20K average and very strong numbers across the board in NYC, LA and respectable results in San Francisco where the pic is booked at the New Mission, Metreon, & Kabuki. The opening for the AGBO produced movie per A23 is $509,6K. That’s a $50,965 theater average which is the second best opening theater average during the pandemic for a platform release after MGM/UAR’s Licorice Pizza ($86K) — and the best opening theater average of 2022 to date. The Daniels’ previous A24 movie, Swiss Army Man, opened to $105,4K in three theaters back in June 2016 for a $35,1K theater average. Bravo, A24.

On the other end of the arthouse spectrum, there’s Sony Pictures Classics’ Mothering Sunday, a very naughty R-rated Merchant-Ivory type of film by filmmaker Eva Husson about a maid living in post-World War I England, who secretly plans to meet with the man she loves before he leaves to marry another woman. The pic, which launched at Cannes last summer got a 76% from critics on Rotten Tomatoes. That score needs to be higher to draw this cautious over 50 crowd back. Five runs in NY and LA are seeing an estimated $10K for a low $2K per theater.

Friday AM: The first big studio wide release in three weeks, Paramount’s The Lost City, kicked off at 4 p.m. Thursday in 3,400 theaters for a $2.5M take. I understand that number doesn’t include any of the previous weekend’s Fandango previews or those at the AMC earlier in the week.

The Sandra Bullock-Channing Tatum-Brad Pitt-Daniel Radcliff romantic comedy adventure is expected to hit $25M at 4,248, but it would not be shocking if it lands in the $30M range. Rotten Tomatoes reviews are at 75% fresh. Overall, it’s a solid weekend for exhibition, and we’re hearing that the Indian movie RRR should be ringing up $12M at 1,000 theaters this weekend.

The comp that’s being used for The Lost City right now is Free Guy, another original comedy, which did $2.2M in Thursday night previews, for a $10.4M Friday and $28.3M opening weekend. Bullock’s previous theatrical release — not counting her Netflix movies The Unforgivable and Bird Box — was Warner Bros/Village Roadshow’s all-star ensemble heist pic Ocean’s Eight, which did $4M in Thursday night previews  in June 2018 before filing a $15.5M Friday, $41.6M.

Among regular films in release, Warner Bros.’ The Batman ends its third week with $48.1M for a running total of $311.4M at 4,302 theaters. The Matt Reeves-directed DC movie looks to do around $20M this weekend. Thursday is estimated to be $2.5M, -11% from Wednesday.