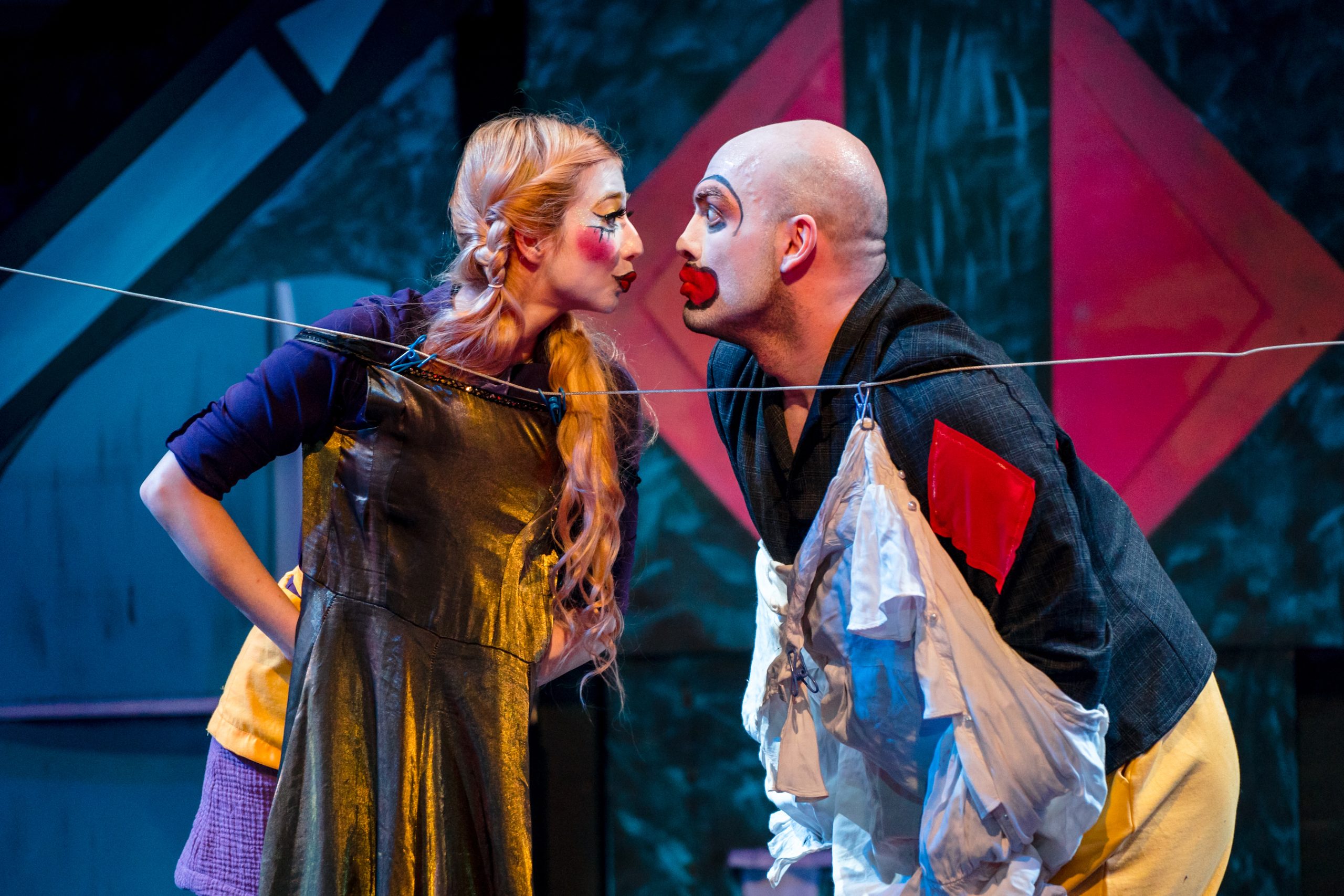 Down on his luck Truffaldino (Vato Tsikurishvili) is curled up in a doorway hoping his large frame, dressed in an asymmetrically tailored jacket with diamond-shaped patches on the sleeves, goes unnoticed as he drinks from a flask. It is then he witnesses the aftermath of a crime as a police officer (Delbis Cardona) acrobatically pursues Florindo (Jacob Thompson), a roguish gentleman wearing a yellow skirt that shows off his socks and garters. Soon after, a small, mustached gentleman, who clearly wants to get out of town, passes. Truffaldino offers the stranger a drink and a bite, and finds himself employed to carry the stranger’s bags to Venice. The vast city is represented on Synetic Theater’s stage, courtesy of scenic designer Phil Charlwood, with an ever-moving arrangement of staircases, bridges, and doorways decorated with colorful lozenges and diamond shapes .

It is ironic that commedia dell’arte is so often introduced to theater students through Venetian playwright and librettist Carlo Osvaldo Goldoni’s The Servant of Two Masters, which rejected many of the style’s conventions. For nearly 200 years, Italian comedians relied on masterful improvisation, with only an outline of a scenario written down. Goldoni kept the archetypical cast of characters, the zany situations, and wrote actual scripts. His comedies are known neither for the poetic sophistication of William Shakespeare nor for the social satire of Jean-Baptiste Molière, but his plotting is so intricately convoluted that they are like exquisite clockworks of ruses, scams, mistaken identities, and coincidences, precise even when they seem to be out of control. It’s little surprise, then, that The Servant of Two Masters, first performed in 1746, continues to be adapted and performed to this day. (Richard Bean‘s popular One Man, Two Guvnors is a scene-by-scene adaptation with the action moved to 1960s Brighton and the dueling aristocrats replaced with London gangsters.)

Once in Venice, Truffaldino’s master seeks to finalize his arranged marriage to Clarice (Irene Hamilton), daughter of Pantalone (Philip Fletcher), but she’s in love with Silvio (Pablo Guillen). After a slapstick tango, Clarice’s believed-dead fiancé, Federigo (played by Guillen in a flashback), reveals she’s actually Beatrice (Nutsa Tediashvili), Federigo’s twin sister. Clarice is free to marry Silvio, her true love, but only if she plays along with Beatrice’s plan to collect the dowry and escape with her own lover, the aforementioned Florindo. Meanwhile, Truffaldino falls in love with Pantalone’s servant, Smeraldina (Maryam Najafzada, who also serves as choreographer), and lucks upon a second job with a second master: Florindo.

Even among local theater companies that specialize in physical theater, Synetic occupies a unique niche: Their repertoire is chiefly adaptations of classic works that eschew the spoken word. In Tsikurishvili’s adaptation (he also directs), what Goldoni was content to provide through exposition is shown on stage through flashbacks—and it works beautifully.

Much of this load is carried by Najafzada’s choreography: The weight-bearing partner acrobatics, part of the dance and physical comedy between Beatrice and Federigo, are a perfect metaphor for their powerful mutual lust. Truffaldino and Smeraldina’s wooing by the clothesline is adorably sweet as they mime what they imagine to be their wedding banquet, as is the kitchen scene in which the two servants flirt by stretching dough into jewelry, hearts, and puppets.

While he does not have as many extended scenes, Guillen nonetheless proves to be a capable mime when on stage, playing sad sack Silvio like a marionette—leaning forward on the balls of his feet as if his head is hanging from a string, his limbs lifting when pulled, gravity and inertia taking hold as if released from above.

Of course, the central scene of every Servant is when Truffaldino must serve both masters their dinner, without revealing that he has two jobs. With each ringing of a bell, Truffaldino runs up or down the stairs, while the chef (Cardona) shapes the dough into another course. In this scene Tsikurishvili and Najafzada gives us a choreographic clockwork as frenetic as any Goldoni plot, and composer Konstantine Lortkipanidze‘s score, whether relying on electronic sounds or the timbres of more recognizable instruments syncs up perfectly with the mad machine.

While Synetic’s approach is rooted in the virtuoso comedy of absurd elaboration, it can also elicit the tragic elements of the story, notably when Tediashvili’s Beatrice, in a scene rarely portrayed on stage in other adaptations, kneels over the body of her brother, knowing that her lover stands accused of his death.

Aleksandr Shiriaev‘s costume designs are a colorful a mishmash of iconic forms, asymmetry, and garish colors and patterns that pop under the glow of Brian Allard‘s lights.

I attended The Servant of Two Masters during a string of matinée performances for students of the Fairfax County Public Schools. While they were certainly more boisterous and uninhibited than the audiences I typically sit with, their noise was that of joyful engagement—the lesson is that Synetic’s Servant is for anyone seeking laughter.

On April 11, after the play’s opening week, Synetic Theater extended the show’s run for an extra week. The show on April 29 will serve as a fundraiser—all proceeds from the performance will be donated to United Help Ukraine ($45–$100).

The Servant of Two Masters, by Carlo Osvaldo Goldoni, adapted and directed by Vato Tsikurishvili, runs through May 1 at Synetic Theater. synetictheater.org. $25–$60.