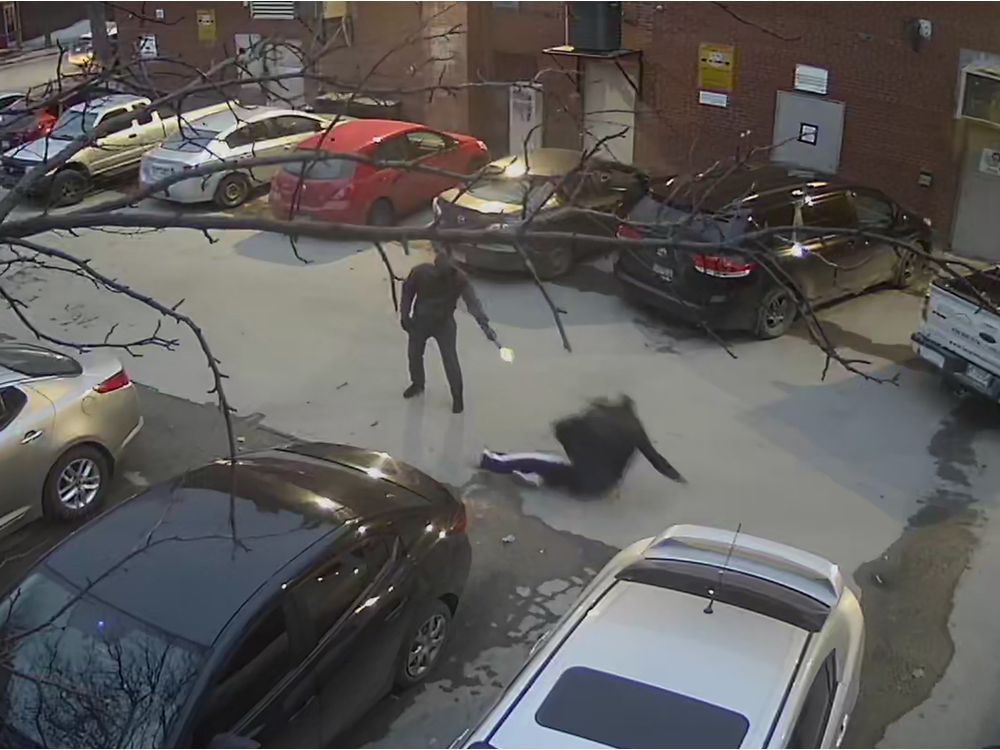 Two men are scheduled to be sentenced next month in a case where they pleaded guilty Thursday to their roles in a shooting that left a man badly injured in a parking lot in Pointe-aux-Trembles three years ago.

One of the men, Jonathan Tshinkenke, 22, of Terrebonne, admitted he was the man whose image was captured by a security camera as he walked up to Roberto Celli on April 5, 2019, and shot the victim in a leg. As Celli lay on the pavement in excruciating pain, Tshinkenke pumped another four bullets into the victim’s legs.

During the same hearing, Emmanuel Charbonneau, 33, of Laval, admitted he acted as Tshinkenke’s getaway driver.

Quebec Superior Court Justice André Vincent accepted the guilty pleas, but later in the hearing he noted that a huge question remains unanswered. He was presented with no evidence that could explain the motive behind the shooting.

Celli, who had to undergo eight operations and almost lost one of his legs, said he believes Tshinkenke intended to shoot another person. He said that before he was shot he ran a water distribution company and now he lives off insurance payments because he is unable to work.

“This injustice forced on me was done without a reason or fault on my part. I feel that this was a message meant for someone else and I was an innocent casualty. Never did I cause these defendants to commit such a horrific act,” Celli said in court. “If I had been involved in criminal activities, maybe I could understand.

“The event was made public by the media and (it was) incorrectly reported that I was known to police. This was totally false. I do not have any criminal record.”

Celli also said the injuries he sustained forced him to put an end to his growing company at a time when he was planning to expand and add another three trucks to distribute water.

A letter from Celli’s wife was read into the court record and she also said she has no idea why her husband was shot. She wrote that she was “humiliated” by the reported allegations that her husband was tied to organized crime.

“I still don’t feel comfortable leaving my own home,” Celli’s wife stated in her letter.

While the accused were originally charged with attempted murder, they both pleaded guilty to aggravated assault, discharging a firearm with the intent to injure, and possession of a firearm.

Their guilty pleas put an end to a trial that was scheduled to begin in May.

“It is a gesture of violence and coldness that speaks for itself,” prosecutor Philippe Vallières-Roland said while summarizing the evidence in the case, which included the video footage of Celli being shot.

Vallières-Roland and fellow prosecutor Claudine Charest asked that each man be sentenced to 10-year prison terms. He highlighted how the shooting was clearly premeditated.

According to a statement of facts deposited as evidence in the case, Celli was also the manager of the building where he ended up being shot. Charbonneau began renting a space to practise music in the building in 2017. Days before he was shot, Celli received a call from a person he did not know who inquired about renting a space from him. Celli agreed to meet the person on April 5, 2019. On the day in question, the same person called to confirm the appointment. When Celli showed up for the meeting, he was shot.

Charbonneau rented the vehicle used in the shooting two hours before it occurred. He and Tshinkenke were arrested in the Dodge Caravan a short while later by heavily armed Montreal police officers. When the vehicle was searched, police found the semi-automatic pistol used to shoot Celli as well as a licence plate that had been removed from the back of the Caravan, pairs of gloves and two masks.

Charbonneau’s lawyer, Richard Tawil, argued that a six-year sentence would be a more appropriate sentence for his client and that time should be subtracted as well because of the way the arrests were made, allegedly in violation of Charbonneau’s rights.

Tshinkenke’s lawyer, Alexandra Longueville, also argued her client’s rights were violated when he was arrested and asked for a five-year sentence.

Vincent is scheduled to make his decision on May 25.