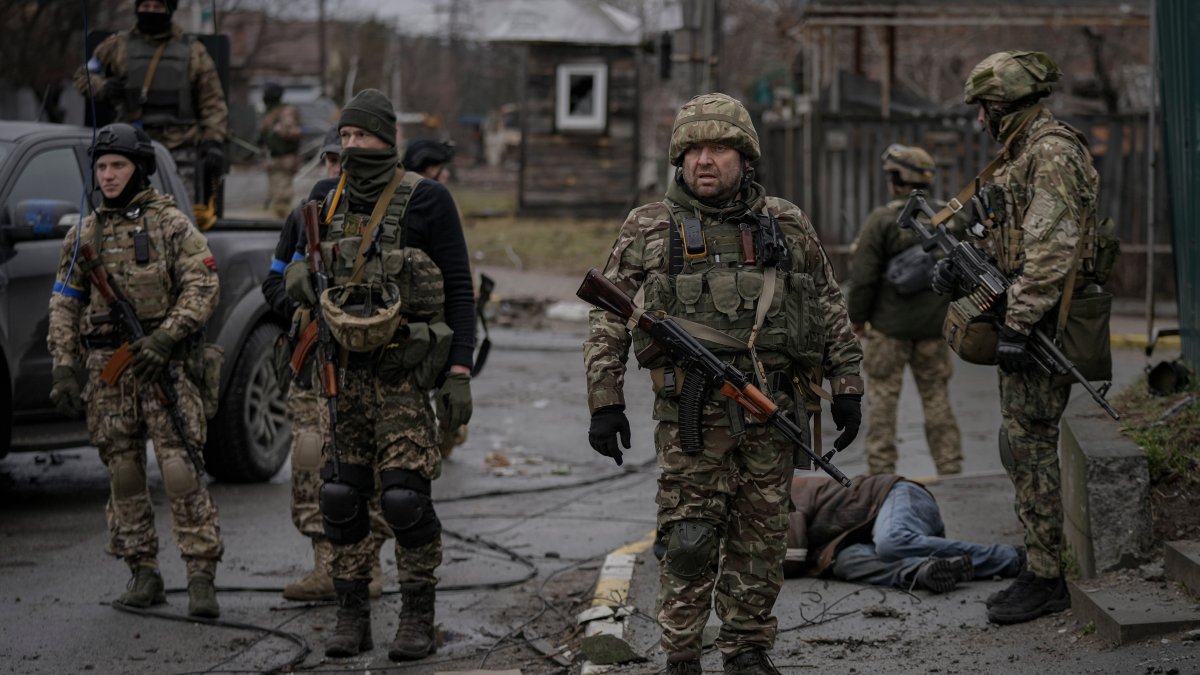 Two loud explosions were heard in Odesa on the Black Sea, and black smoke was seen rising above the city, which is where Ukraine’s navy is headquartered. It is west of Mariupol, a smaller port that has been under attack for almost the entire war and rescuers are desperate to reach.

The Odesa city council said in a brief statement that a morning airstrike set off fires in some areas. The Russian military said hours later that it used ships and aircraft-fired missiles to strike an oil processing plant and fuel depots that were supplying Ukrainian troops.

The city council said Ukraine’s air defense shot down some missiles before they hit the city. Ukrainian military spokesman Vladyslav Nazarov said there were no casualties from the attack.

In Mariupol, conditions remained dire and prospects for escape uncertain. The surrounded city, which has been brutalized by some of the war’s worst attacks, reported weeks ago that water, food, fuel and medicine were running out. About 100,000 people are believed to still be there, less than a quarter of the city’s prewar population of 430,000.

The International Committee of the Red Cross said it hoped a team it sent to help evacuate residents would reach Mariupol on Sunday. Ukrainian authorities said Russia agreed days ago to allow safe passage from the city, but similar agreements have broken down repeatedly under continued shelling.

Mariupol is in the mostly Russian-speaking Donbas region, where Moscow-backed separatists have fought Ukrainian troops for eight years. Its capture would create an unbroken land corridor from Russia to Crimea, which Moscow seized from Ukraine in 2014.

With Mariupol squarely in Russia’s crosshairs, Ukraine insists it has gained a leg up elsewhere in the country. As his country’s troops retook territory north of the capital of Kyiv from departing Russian troops, President Volodymyr Zelenskyy called on all Ukrainians to do whatever they could “to foil the enemy’s tactics and weaken its capabilities.”

“Peace will not be the result of any decisions the enemy makes somewhere in Moscow. There is no need to entertain empty hopes that they will simply leave our land. We can only have peace by fighting,” Zelenskyy said late Saturday.

Zelenskyy and Ukraine’s Western allies believe Russia has shifted its forces from the capital region and the country’s north in order to build strength in the east and south. The Ukrainian leader again urged the West to supply his military with warplanes and more anti-missile systems.

“Every Russian missile that hits our cities and every bomb dropped on our people, on our children, only adds black paint to the history that will describe everyone on whom the decision depended – the decision of whether to help Ukraine with modern weapons,” Zelenskyy said.

While the geography of the battlefield morphed, little changed for many Ukrainians more than five weeks into a war that has sent more than 4 million people fleeing the country as refugees and displaced millions more from their homes.

The regional governor in Kharkiv, said Sunday that Russian artillery and tanks performed over 20 strikes on Ukraine’s second-largest city and its outskirts in the country’s northeast over the past day. Gov. Oleh Synyehubov said a missile strike on the city of Lozovo wounded four people and that Russian tanks bombarded a hospital in the town of Balakliia.

Zelenskyy alleged Saturday that Russian troops have left mines around homes, abandoned equipment and even the bodies of the dead as they withdraw from around Kyiv. Those claims could not be independently verified, but Ukrainian troops were seen heeding the warning.

In Bucha, northwest of the capital, Associated Press journalists watched as Ukrainian soldiers, backed by a column of tanks and other armored vehicles, used cables to drag bodies off of a street from a distance for fear they may have been booby-trapped. Locals said the dead — AP counted at least six — were civilians killed without provocation by departing Russian soldiers.

In towns and cities surrounding Kyiv, signs of fierce fighting were everywhere in the wake of the Russian redeployment. Destroyed armored vehicles from both armies lay in streets and fields along with scattered military gear.

Ukrainian troops were stationed at the entrance to Antonov Airport in the suburb of Hostomel, demonstrating control of the runway that Russia tried to storm in the first days of the war.

Inside the compound, the Mriya, one of the biggest planes ever built, lay wrecked underneath a hangar pockmarked with holes from the February attack.

The head of Ukraine’s delegation in talks with Russia said Moscow’s negotiators informally agreed to most of a draft proposal discussed during face-to-face talks in Istanbul this week, but no written confirmation has been provided.

The Ukrainian negotiator, Davyd Arakhamia said on Ukrainian TV that he hoped the was developed enough so that the two countries’ presidents can meet to discuss it.

Ukrainian authorities warned that Russia’s focus on eastern Ukraine did not mean Kyiv and other cities wouldn’t become targets again. In his evening address Saturday, Zelenskyy called for his people to do whatever they can to ensure the country’s survival, even by engaging in acts as simple as showing each other kindness.

“When a nation is defending itself in a war of annihilation, when it is a question of life or death of millions, there are no unimportant things. … And everyone can contribute to a victory for all,” the president said.

Karmanau reported from Lviv, Ukraine. Andrea Rosa in Irpin, Ukraine, and Associated Press journalists around the world contributed to this report.

Follow the AP’s coverage of the war at https://apnews.com/hub/russia-ukraine