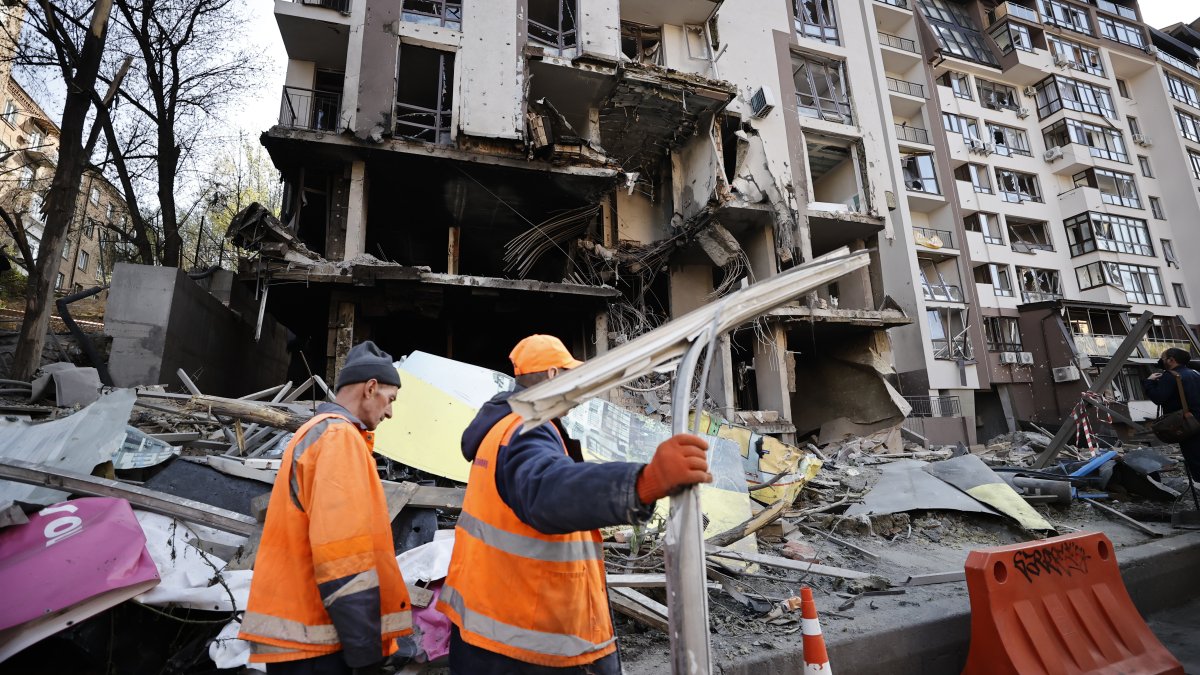 Ukraine’s leader accused Russia of trying to humiliate the United Nations by raining missiles on Kyiv during a visit by Secretary-General António Guterres, an attack that shattered the capital’s tentative return to normality as the focus of the war moved east.

President Volodymyr Zelenskyy said Ukraine’s forces were holding off Russia’s attempted advance in the south and east, as efforts continued to secure safe passage for residents of Mariupol, which has been largely reduced to rubble in a 2-month-long siege.

Russia pounded targets all over Ukraine on Thursday, including the attack on Kyiv that struck a residential high-rise and another building. Mayor Vitali Klitschko said Friday that one body was found in the rubble of the attack. Ten people were wounded, including at least one who lost a leg, according to Ukraine’s emergency services.

In an apparent reference to the same strike, Russia’s Defense Ministry said Friday that it had destroyed “production buildings” at the Artem defense factory in Kyiv.

The boldest Russian bombardment of the capital since Moscow’s forces retreated weeks ago came barely an hour after Zelenskyy held a news conference with Guterres, who toured some of the destruction in and around Kyiv and condemned attacks on civilians.

“This says a lot about Russia’s true attitude towards global institutions, about attempts of Russian authorities to humiliate the U.N. and everything that the organization represents.,” Zelenskyy said in an overnight video address to the nation. “Therefore, it requires corresponding powerful reaction.”

One aim of Guterres’ visit was to secure the evacuation of people from the ruined southern port city of Mariupol, including a shattered steelworks where Ukrainian defenders are holed up and hundreds of civilians are also sheltering,

It was unclear whether it had borne fruit. Previous evacuation attempts have collapsed.

“I cannot confirm the exact details of the operation to make sure it is done with safety for our people and for civilians stranded in Mariupol,” said Saviano Abreu, a spokesperson for the U.N.’s humanitarian office.

An official in Zelenskyy’s office said negotiations were underway with U.N. mediation and did not rule out that an evacuation of the plant could come Friday. The official spoke on condition of anonymity because they were not authorized to speak to the media.

Mariupol has seen some of the most dramatic sufferings of the war. Under siege since the early days of the invasion, many of its residents became trapped with scarce access to food, water, medicine or electricity.

An estimated 100,000 people are believed to still be in the city, and the city council warned Thursday that a lack of safe drinking water or a working sewer system could lead to outbreaks of deadly diseases such as cholera and dysentery. It added that bodies lay decaying under the rubble.

Russian forces largely control the city, but some 2,000 Ukrainian fighters are holed up at the steel plant, the last known pocket of resistance. About 1,000 civilians are with them, and the fighters said recent concentrated bombings killed and wounded people.

Video posted online by Ukraine’s Azov Regiment inside the steel plant showed people combing through the rubble to remove the dead and help the wounded. The regiment said the Russians hit an improvised underground hospital and its operating room, killing an unspecified number of people. The video couldn’t be independently verified.

The governor of Ukraine’s central Dnipropetrovsk region, Valentyn Reznichenko, said two towns there were hit by Russian Grad rockets on Friday. There was no immediate word on casualties or damage. Separately, the governor of Russia’s Kursk region, Roman Starovoit, said that a border post came under mortar fire from Ukraine and that Russian border forces returned fire. He said there were no casualties on the Russian side.

That comes a day after explosions were reported across the country — in Polonne in the west, Chernihiv in the north near the border with Belarus, and Fastiv, a large railway hub southwest of the capital. The mayor of Odesa, in southern Ukraine, said rockets were intercepted by air defenses.

President Joe Biden announced Thursday that he is asking Congress for billions of dollars in new aid for Ukraine in their fight against Russia. “Our unity with Ukraine is sending an unmistakable message to Putin: you will never succeed in dominating Ukraine.”

Ukrainian authorities also reported intense Russian fire in the Donbas — the eastern industrial heartland that the Kremlin says is its main objective — and near Kharkiv, a northeastern city outside the Donbas that is seen as key to the offensive.

In Kyiv, explosions shook the city and flames poured out the windows of the residential high-rise and another building. The capital had been relatively unscathed in recent weeks since Moscow refocused its efforts on seizing all of the Donbas.

The explosions in northwestern Kyiv’s Shevchenkivsky district came as residents have been increasingly returning to the city. Cafes and other businesses have reopened, and a growing number of people have been out and about, enjoying the spring weather.

On his visit to Ukraine, Guterres surveyed the destruction in small towns outside the capital that saw some of the worst horrors of the first onslaught of the war. He condemned the atrocities committed in towns like Bucha, where evidence of mass killings of civilians was found after Russia withdrew in early April in the face of unexpectedly stiff resistance.

“Wherever there is a war, the highest price is paid by civilians,” the U.N. chief lamented.

Getting a full picture of the unfolding battle in the east has been difficult because airstrikes and artillery barrages have made it extremely dangerous for reporters to move around. Several journalists have been killed in the war. Both Ukraine and the Moscow-backed rebels fighting in the east also have introduced tight restrictions on reporting from the combat zone.

Western officials say the Kremlin’s apparent goal is to take the Donbas by encircling and crushing Ukrainian forces from the north, south and east.

But so far, Russia’s troops and their allied separatist forces appear to have made only minor gains, taking several small towns as they try to advance in relatively small groups against staunch Ukrainian resistance.

Britain’s Defense Ministry said Friday that the limited Russian territorial gains have been achieved at a significant cost to their forces. Britain has put Russian deaths in the two-month war at more than 15,000, a far higher number than Moscow has acknowledged.

Russian military units were mauled in the abortive bid to storm Kyiv and had to regroup and refit. Some analysts say the delay in launching a full-fledged offensive may reflect a decision by Russian President Vladimir Putin to wait until his forces are ready for a decisive battle, instead of rushing in and risking another failure that could shake his rule amid worsening economic conditions at home because of Western sanctions.

Even before Russia invaded Ukraine, the U.S. had been sending military equipment to the country for its defense. So where do these weapons come from? And how do these shipments affect our own military readiness? William Hartung, senior research fellow at the Quincy Institute for Responsible Statecraft, joined NBCLX storyteller Clark Fouraker to explain.

Many observers suspect Putin wants to be able to claim a victory in the east by Victory Day, on May 9, one of the proudest holidays on the Russian calendar, marking the defeat of Nazi Germany during World War II.

The terrible human cost of the war, which has driven more than 11 million Ukrainians from their homes, continues to climb.

In Lyman, a town in Donetsk where Russian forces are reportedly trying to advance as part of their Donbas push, shells rained on Tatiana Maksagory’s home this week, devastating her family.

Maksagory’s 14-year-old grandson, Igor, was declared dead after emergency services drove him to the hospital. Her daughter was in serious condition and her son-in-law was also killed.

“Grandma, will I live?“ she said Igor asked her when they were in the basement waiting for help. “I said that he would live. But look what happened, I betrayed him.”

Click here for complete coverage of the crisis in Ukraine.

As the Russian invasion of Ukraine has dragged on, the endgame has become less clear. NBCLX storyteller Clark Fouraker spoke to Philip Wasielewski of the Foreign Policy Research Institute about the war’s possible outcomes, which hinge on a key question: Does Russia want to fight — or find a way out?

Associated Press journalists Jon Gambrell and Yuras Karmanau in Lviv, Mstyslav Chernov in Kharkiv, Yesica Fisch in Sloviansk, and AP staff around the world contributed to this report.

Follow AP’s coverage of the war in Ukraine: https://apnews.com/hub/russia-ukraine