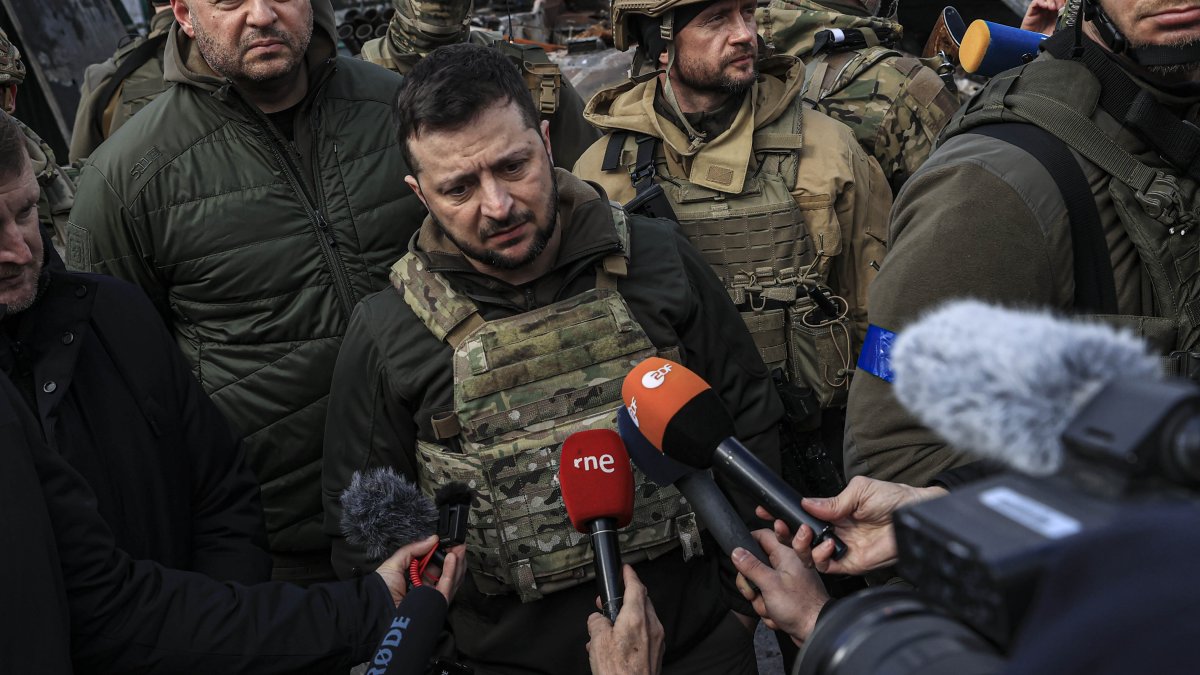 Ukrainian President Volodymyr Zelenskyy will speak to the U.N. Security Council for the first time Tuesday at a meeting certain to focus on what appear to be deliberate killings of civilians in Ukraine by Russian troops.

The dead were discovered after Russian forces pulled out of a town on the outskirts of the capital, Kyiv, and have sparked global outrage and vehement denials from the Russian government that it was responsible.

The United Kingdom, which holds the council presidency this month, announced late Monday that Zelenskyy would speak at the open meeting already scheduled for Tuesday to discuss the situation in Ukraine.

Zelenskyy is to address the U.N.’s most powerful body virtually after it receives briefings from U.N. Secretary-General Antonio Guterres, his political chief Rosemary DiCarlo, and U.N. humanitarian chief Martin Griffiths, who is trying to arrange an immediate humanitarian cease-fire and met with senior Russian officials in Moscow on Monday and will shortly be heading to Ukraine.

Videos and photos of streets in the town of Bucha strewn with corpses of what appeared to be civilians, some with their hands tied behind their back, have led to global revulsion, calls for tougher sanctions on Russia and its suspension from the U.N.’s premiere human rights body, the Human Rights Council.

According to Ukraine’s prosecutor-general, Iryna Venediktova, the bodies of 410 civilians have been removed from Bucha and other Kyiv-area towns that were recently retaken from Russian troops.

Associated Press journalists have reported seeing dozens of bodies in various spots around Bucha, northwest of the capital. The bodies included a group of nine in civilian clothes who appeared to have been shot at close range. At least two had their hands tied behind their backs. A bag of spilled groceries was near one of the dead.

Russia’s U.N. ambassador, Vassily Nebenzia, accused Ukraine and the West on Monday of “a false flag attempt” to blame Russian troops for atrocities in Bucha that he charged were committed by Ukrainian nationalists. He called video of bodies lying in the streets “a crude forgery,” and insisted that during the time that Bucha was under Russian control, “not a single local person has suffered from any violent action.”

At a news conference, the Russian ambassador showed brief video footage of the smiling mayor of Bucha on March 31 calling the withdrawal of Russian forces a victory of the Ukrainian army and never mentioning “any mass atrocities, dead bodies, killings, graves or anything like that.” He also showed footage from Ukrainian television on April 2 showing Ukrainian soldiers entering Bucha, with “no dead bodies in the streets.”

He said Russia would present further “factual evidence” to the Security Council on Tuesday.

Nebenzia was asked whether he believed videos of Ukrainian family members speaking about the deaths of loved ones killed by Russian troops were also faked. He responded: “This is warfare. In warfare anything happens. You cannot exclude that civilians are dying. That is a sad fact of life.”

But he again charged that the Bucha videos were “staged.”

Britain’s U.N. ambassador, Barbara Woodward, called the images from Bucha “harrowing, appalling, probable evidence of war crimes and possibly a genocide,” and she said the Security Council needs “to think about how we deal with that.”

The council remains paralyzed on taking any action on Ukraine because Russia as one of its five permanent members has veto power. But the 193-member General Assembly, where there are no vetoes, has condemned Russia’s invasion and demanded an immediate cessation of hostilities, withdrawal of Russian forces and protection for civilians.

U.S. Ambassador Linda Thomas-Greenfield announced Monday that the United States will soon introduce a General Assembly resolution that would suspend Russia from the U.N.’s premiere human rights body, the 57-nation Human Rights Council, saying there are increasing signs that it committed war crimes in Ukraine. The council is based in Geneva but its members are elected by the 193-nation General Assembly.

Thomas-Greenfield told NPR late Monday that the U.S. plans to seek a vote “as soon as possible this week, and possibly as early as Thursday.”

Any resolution to suspend Russia’s membership rights would require support from two-thirds of member countries that vote “yes” or “no.” Assembly resolutions are not legally binding — unlike Security Council resolutions — but they do have clout as a reflection of global opinion.

Russia had sought an emergency meeting of the Security Council to discuss Bucha on Monday afternoon, but Woodward told reporters that with Tuesday’s council meeting already scheduled “we didn’t see a good reason to have two meetings back-to-back on Ukraine.”

Nebenzia was asked if the U.S.-led effort to suspend Russia from the rights council and Britain’s refusal to hold an emergency Security Council meeting Monday at Russia’s request would affect talks between Moscow and Kyiv.

“This will not facilitate or encourage, or be helpful, to what is happening between Russian and Ukrainian peace talks,” Nebenzia said.

Click here for complete coverage of the crisis in Ukraine.