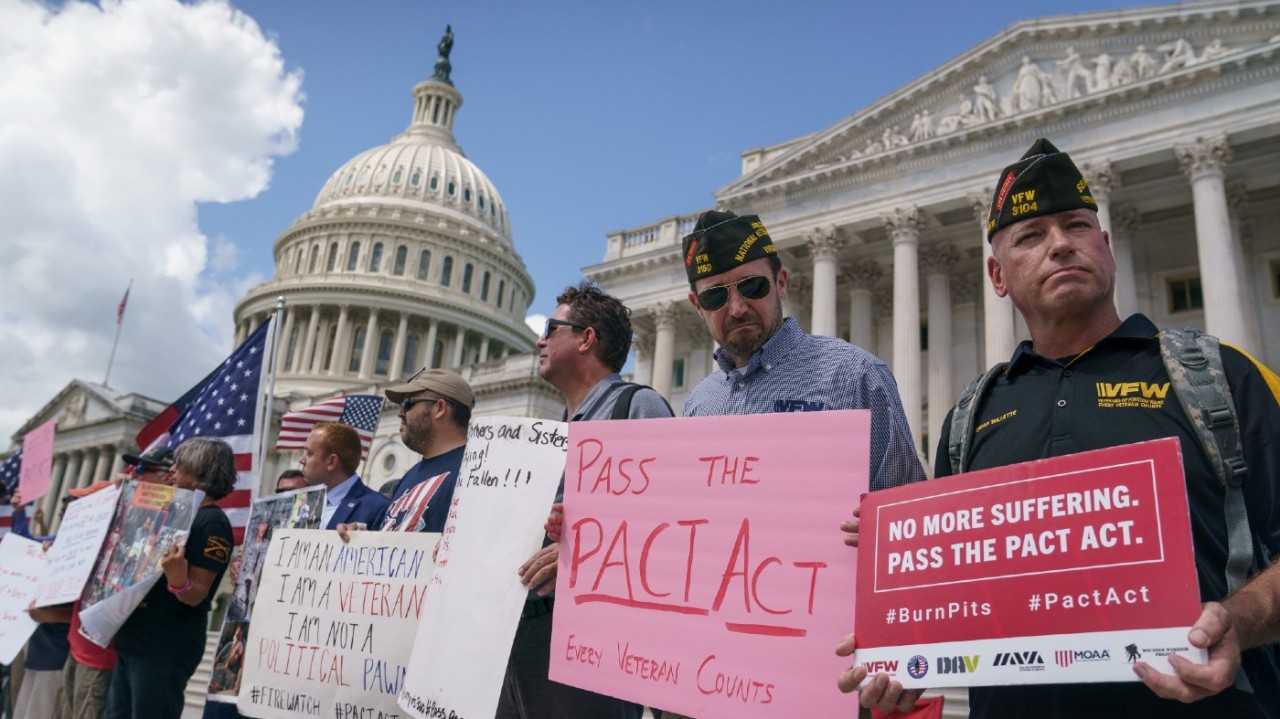 Veterans and advocates spent the weekend staked outside the Capitol demanding that GOP senators drop their opposition to much-anticipated legislation to help veterans who are suffering illnesses due to toxic exposures.

While the Senate is expected to hold another vote on the bill this week, those protesting outside said they were tired of waiting.

“These veterans don’t have time! They’re running out of time. They need health care now, and if they don’t get it, they’re dying!” said Natalia Kempthorne-Curiel, who traveled with her father Nathan Kempthorne to the demonstration.

About two dozen advocates stood outside the Capitol on Thursday, venting their frustrations to members of the press about the GOP Senators who backtracked on the bill, citing concerns about how funds are allocated.

The Senate initially passed the PACT Act by a vote of 84-14 in June, and the House passed the bill in July by a vote of 342-88. The upper chamber needed to re-pass the bill because the House version included technical corrections.

But last Wednesday, only 55 senators voted to pass the bill, falling short of the 60 votes needed to overcome a filibuster. Twenty-five Republicans who had previously supported the bill changed their votes to oppose it.

“We had so much support and we celebrated that the Republicans and Democrats could come together and do the right thing,” said Susan Zeier, who’s son-in-law’s name is in the title of the bill.

“And to pull this out from under us at the 11th hour, it’s really cruel,” she said.

Thursday evening, Rosie Torres, the founder of the non-profit organization Burn Pits 360, and other veterans’ advocates began brainstorming how they were going to pressure the Senate to finally pass the bill. They were already planning to hold a big rally to advocate passage of the bill, so they decided to start that evening with a sit-in outside Congress.

“Slowly but surely, people started trickling in, and people have flown in from New York, take the train, taking the bus” Torres said. “Ohio, Missouri, North Carolina, South Carolina — these people are driving. They’re in the cars and they’re coming.”

Torres first became involved with the issue of burn pits after her husband, Army Capt. Le Roy Torres, suddenly fell ill after his deployment to Iraq. As she researched the issue, she came across a Facebook group where people shared their stories of loved ones becoming sick or dying.

Torres, who at the time was working for the Department of Veterans’ Affairs, couldn’t get the care that she needed for her husband.

“We were up against something huge if I myself, who work here and understand the system, can’t get access to specialized health care, or answers,” she said.

The PACT Act looks to expand eligibility for veterans’ benefits to post-9/11 veterans who were exposed to toxins from burn pits, which were widely used for waste disposal at military sites. The bill adds 23 illnesses linked to burn pits and toxic exposure to the VA’s list of presumptive service conditions.

The measure also looks to expand presumptions related to Agent Orange exposures to veterans who served outside of Vietnam.

Some people who joined the demonstration outside of the Capitol weren’t there for themselves, but for other veterans who were suffering as a result of toxic exposures.

Kempthorne, who served in the Navy and Air Force, suffers several respiratory illnesses — including allergic rhinitis and acute sinusitis — related to his service. But he has friends with much worse illnesses that need care.

“My friends, whenever I call them, they’re talking about wanting to kill themselves — that happens all the goddamn time. And they’re sick of it,” Kempthorne said.

Dan Eggert, who served in the Army Reserve and Wisconsin National Guard, is currently undergoing treatment for colon cancer. He says he doesn’t like to think that his cancer was due to toxic exposures, but is grateful for the access to care from the VA.

Eggert joined the protest because he wants other veterans to have the same care.

The most outspoken Republican against the bill has been Sen. Pat Toomey (Pa.), who has argued it includes a “budgetary gimmick” to create $400 billion that could be spent on matters unrelated to veterans’ care.

Sen. Jon Tester (D-Mont.), chair of the Senate Veterans’ Affairs Committee, has hit back at the Pennsylvania Republican’s concerns, and urged his GOP colleagues to get back on board with the bill.

“I think the American people see through all this garbage that happened last week in Washington, D.C. And they, along with the veterans, are saying enough is enough. Let’s get this done, our veterans deserve this benefit” Tester [Tester%20said%20on%20CNN.%20“]said on CNN Sunday.

The GOP’s turn against the bill occurred hours after Democrats announced a deal on a new spending deal, fueling speculation that the opposition was linked to the revived reconciliation efforts.

John Stewart has also been an outspoken supporter of the veterans, appearing across cable TV networks since Thursday to rail against Toomey and Ted Cruz (R-Tex.), who voted against the bill.

President Biden delivered a surprise on Saturday, when he had Veterans’ Affairs Secretary Dennis McDonough deliver pizza to the veterans. The president spoke with the advocates via FaceTime, after his plans to visit them personally were disrupted when he tested positive for COVID-19.

Biden has made the issue of toxic exposures a personal one, opening up about his belief that the cancer his son Beau Biden died of 2015 was connected to toxic exposures during his military service.

“That was huge for us,” Torres said of Biden’s visit. “We were talking to a father of a soldier who passed away, not to the president in that moment. So, it felt very sincere, just a moment that we had to share together.”

Senate Majority Leader Charles Schumer (D-N.Y.) said last week that the Senate would hold another vote on the bill on Monday. But on Monday his office said there will be a vote on the bill “in the coming days.”

“These brave Americans sacrificed everything. They risked life and limb, and the very least we can do as a country has to ensure they receive top care,” Schumer said.

“I urge both sides to work together to quickly pass the PACT Act so we can send it to the President’s desk ASAP,” he added.

Torres said the demonstration outside the Capitol would continue until the bill gets passed.

“Every day that they delay is another veteran that dies. So, we will be here until we get the vote passed,” Torres said. “We’re not going anywhere.”