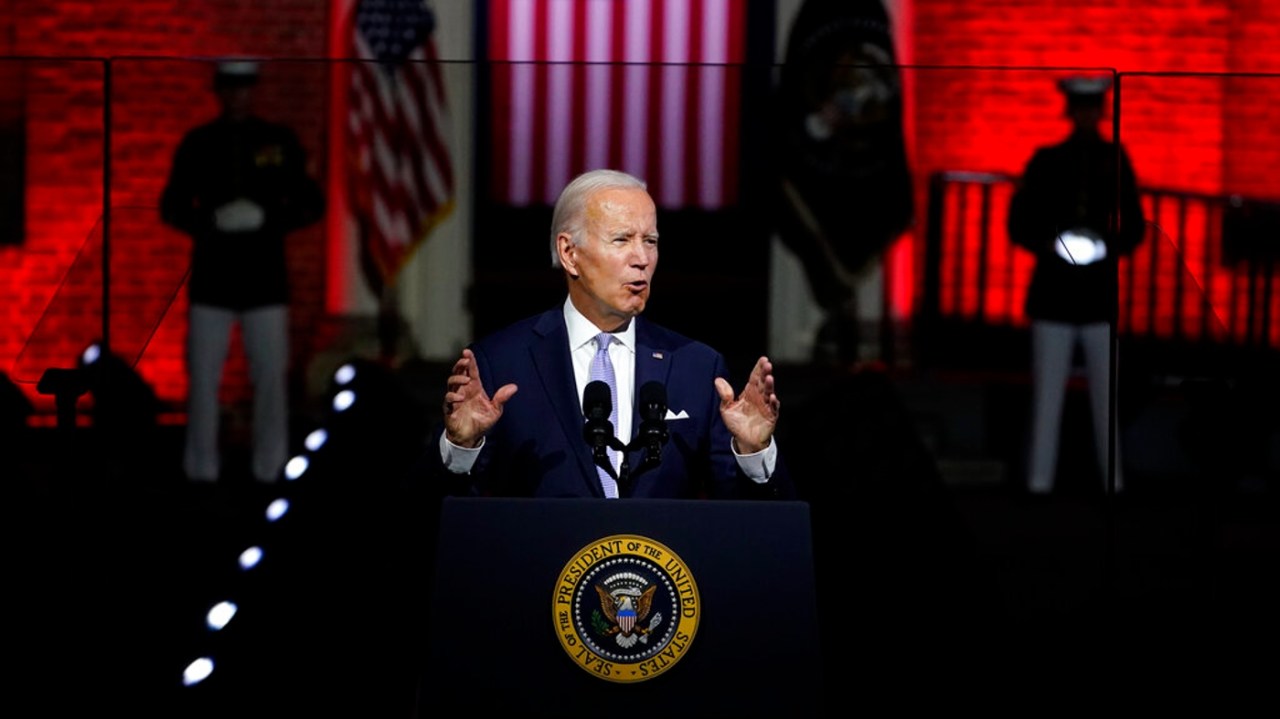 It’s not exactly breaking news that Democrats detest Donald Trump. They loathe just about everything about him. And by “everything,” I mean … everything! But in a crazy way, they love the guy they hate. Well, maybe not actually “love”; more like “need,” because they see him as their best hope for a come-from-behind victory in November.

If you don’t believe me, maybe you’ll believe Joe Biden. In Philadelphia last week, the president couldn’t stop talking about his predecessor. He said “there is no question that the Republican Party today is dominated, driven and intimidated by Donald Trump and the MAGA Republicans.”

MAGA Republicans, Biden said, “represent an extremism that threatens the very foundations of our republic.” He said this fall’s midterm elections will represent a choice between “the light of truth” and  “the shadow of lies.”

This was billed as a “Battle for the Soul of the Nation” prime-time speech — and it had all the trappings of a major league presidential address. Biden spoke in front of Independence Hall, which was bathed in crimson light, as two Marines in full dress uniform stood behind him, strategically in the camera’s shot. But for all its intended majesty, the red lighting “made the stately face of Independence Hall look like the entrance to a bordello in some red-light district,” as Bill McGurn put it in his Wall Street Journal column. (I’m glad I wasn’t the only one who thought that.)

But even the warm glow of that creepy red light couldn’t mask the reality of what was going on.  The speech was often nasty, and more than a little partisan. Biden and the political team who came up with the game plan were trying to elevate the man they loathe. They were pretending that Joe Biden and the Democratic Party are some kind of superheroes working to save the nation from the forces of evil.

But it all comes down to this: They want to run against the man whose name isn’t even on the ballot. They want to tell the American people that Donald Trump and his most loyal supporters are nothing less than a threat to democracy — and, who knows, they might actually rev up the base and convince enough swing voters to reject Republican congressional candidates this fall.

The Wall Street Journal called the speech “deeply cynical and divisive,” saying, “It contradicts Mr. Biden’s pledge, during the 2020 campaign and in his inaugural address, that he would unite the country. He repeated that claim of ‘unity’ on Thursday but by now it is a throwaway line.”

Fair enough. But you don’t have to think Joe Biden is a nice guy who’s doing a great job — or is even competent — to acknowledge that he’s right about some of what he said.

The Republican Party arguably is “dominated, driven and intimidated by Donald Trump and the MAGA Republicans.”

Trump and his loyal “MAGA supporters” — the ones who don’t believe Biden is the legitimate president of the United States — really are a threat to “the very foundations of our republic.”

Trump did try to subvert the peaceful transfer of power after he lost the 2020 presidential election. He did fire up his fans on Jan. 6, 2021— and a lot of them stormed the Capitol.

Democrats know what a lot of Republicans fear, even if they won’t say it out loud: That if Joe Biden and the blue team can make the midterm elections about Donald Trump, they’d have a good chance of at least minimizing their losses in November — and with a little luck, maybe do even better than that.

Whatever else Biden’s team hoped to accomplish, they had to figure that Trump would feel the need to respond. If Biden’s speech could get under his skin and get him to fire back, then Trump would become the center of attention — and as long as the conversation is about the former president, maybe, Democrats hope, it won’t be about the current president’s failure to control inflation, crime, illegal immigration, and the Democrats’ embrace of woke, progressive ideology.

And just as the blue team calculated, Trump took the bait.

On social media, he said that Biden “must be insane, or suffering from late-stage dementia.” Two days later, at a GOP rally in Philadelphia, he said that Biden is “an enemy of the state,” and his speech was “the most vicious, hateful, divisive speech ever delivered by an American president, vilifying 75 million citizens.”

On Labor Day, Biden was at it again, this time dusting off a very old Democratic trope to scare older folks, saying the “Trumpies” — as he called them — and the “MAGA Republicans in Congress are coming for your Social Security.”

Say goodbye to the man who, right after he took office, told the American people, “We can join forces, stop the shouting and lower the temperature. For without unity, there is no peace, only bitterness and fury.” And while you’re at it, say hello to a lifelong politician who will be taking aim at the foil he invented — those nasty “semi-fascists” — from now until at least November.


Time for the West to seize Russian state assets

We won’t know for a while if the Democrats’ strategy will work, if making the midterms about Donald Trump and his most loyal supporters will be enough to convince swing voters that Republicans in general can’t be trusted with power. We’ll have the answer on Nov. 8.

But we do know this much right now: Donald Trump can’t take a shot without firing back. And that’s just what the Democrats are hoping. It’s at least one reason Joe Biden delivered that partisan speech in Philadelphia.

Bernard Goldberg is an Emmy and an Alfred I. duPont-Columbia University award-winning writer and journalist. He was a correspondent with HBO’s “Real Sports with Bryant Gumbel” for 22 years and previously worked as a reporter for CBS News and as an analyst for Fox News. He is the author of five books and publishes exclusive weekly columns, audio commentaries and Q&As on his Substack page. Follow him on Twitter @BernardGoldberg.